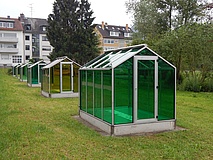 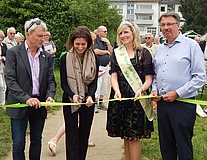 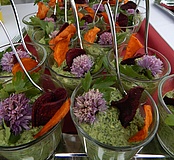 A lot has changed since the Grüne Soße monument was inaugurated on the edge of the Oberräder herb fields about eleven years ago. The ECB was still based at Willy-Brandt-Platz and the old Henninger Turm was still standing. A lot has happened in the meantime. New things have been built, old things have had to give way - but the monument has been able to establish itself as an integral part of the cultural landscape. However, such a landmark is like the herb fields themselves: it has to be looked after. And in recent years it has suffered visibly: The floor plates were weathered and the panes faded. The fact that the panes of each of the seven little houses had a different shade of green was hardly recognizable anymore. For those responsible for the GrünGürtel project group, it was clear: the monument could no longer represent our national food in this way.

Together with the artist Olga Schulz, who had created the concept for the monument eleven years ago, the restoration was tackled. Support came from the Regionalpark Rhein-Main Südwest GmbH, which together with the environmental agency shared the restoration costs of 70,000 &euro;. "The Green Sauce Monument is an important information station for the Regionalpark, to show the preservation of tradition, but also the diversity of agricultural products in our region," said Kelsterbach's mayor Manfred Ockel, who attended the inauguration of the renovated monument as managing director of the Regionalpark Rhein-Main Südwest GmbH.

With new acrylic glass panes specially made in Italy, the seven greenhouses now shine again in their old glory with the different shades of green, each representing a herb of the Frankfurt Grie Sooß. And now, probably, the critics who in recent months have been angry about the state of this monument, which is even mentioned in some guidebooks, will now fall silent. At the inauguration ceremony, which Manfred Ockel took over together with Thomas Hartmanshenn from the Environmental Agency and which was celebrated with the first Green Sauce Queen Susanne Reichert I. and numerous other guests in a befitting manner with green sauce and cider, the joy about the freshly renovated monument was very great. "I look forward to many more green years," said Olga Schulz at the end of her short speech. So do we!

You can find the Green Sauce Monument at Speckgasse 7, 60599 Frankfurt am Main