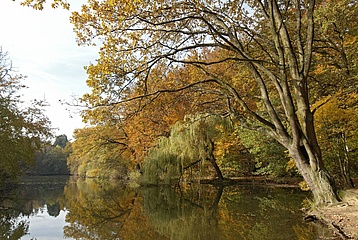 (kus) For 25 years, the Frankfurt GreenBelt has existed, along with the bike routes and hiking trails it has created over the years. Just in time for the upcoming birthday, these will be supplemented by a "GreenBelt Anniversary Trail". On Friday, November 11, Rosemarie Heilig, Head of the Department of the Environment, invites you to the opening at 2 p.m.

The meeting point is the "Louisa" stop on tram line 17. However, the stop can only be reached by S-Bahn, as track work is currently taking place on line 17 and there is only a rail replacement bus that does not stop at Louisa.

From there, the approximately three-kilometer-long path leads via the most popular excursion destination in the city forest, the Jacobiweiher, to Neu-Isenburg, where it also ends at the stop. Along the route, which is signposted with the GrünGürtel anniversary animal, there are also lesser-known places such as the Königsbrünnchen and the Königsbach, as well as old beech forests and young reforestations. The forest is currently showing off its colourful autumn garb. More information at Http://www.grüngürtel.de