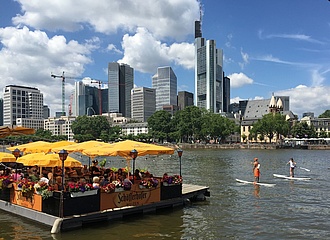 Frankfurt is becoming increasingly attractive for tourists. This is proven by the 2018 half-year balance of the guest and overnight stay statistics. According to this, there was a significant increase in the first six months of the year compared to 2017. Lord Mayor Peter Feldmann, who is also Chairman of the Supervisory Board of Tourismus+Congress GmbH (TCF), was accordingly able to proudly sum up: "From January to June 2018, 4.9 million overnight stays were generated; that is 7.25 per cent more than in the same period of the previous year. With 2.8 million overnight visitors, the number of visitors increased by 5.9 percent in the process."

The metropolis on the Main was particularly in demand in June, with 936,739 overnight stays (+12.9 percent) and 544,126 overnight visitors (+9.4 percent). The number of accommodation establishments rose by 15 new establishments to 289, while the number of beds increased to 53,039 (+5.3 per cent). Hotel bed occupancy rose slightly to 50.7 percent, representing an average room occupancy of about 70 percent. The average length of stay is stable at 1.7 days with a slight upward trend. In a German city comparison, Frankfurt continues to rank fourth in terms of overnight stays behind Berlin, Munich and Hamburg.

Lord Mayor Peter Feldmann is more than pleased with this development: "Frankfurt am Main is a city full of dynamism. Always on the move, always changing. The steadily growing numbers of business travellers, but increasingly also of more and more private travellers, show that the numerous efforts of the city, especially of the TCF, are bearing fruit. The New Old Town, for example, is already being enthusiastically received by visitors." Thomas Feda, TCF Managing Director, added: "Frankfurt is very much in vogue as a travel destination. The city is cosmopolitan, lively, has a wide range of cultural offerings, versatile shopping opportunities and invites you to always discover something new."

The outlook for the second half of the year makes Lord Mayor Peter Feldmann and Thomas Feda very confident. This half-year result is an outstanding basis, they say, especially in view of the difficult global security and economic policy environment. Both expect growth of three to four percent for 2018 as a whole