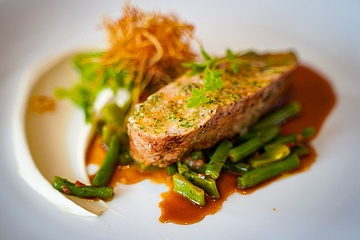 The Guide MICHELIN Germany has awarded its stars for 2022. Twelve of them went to a total of ten restaurants in Frankfurt. Two of them - the Gustav in the Westend and the Lafleur in the Palmengarten - were able to confirm their status as two-star restaurants. Confirming one star each were Carmelo Greco, Erno's Bistro, the Français at the Steigenberger Frankfurter Hof, the Restaurant Villa Merton, the Seven Swans (which made gastro history as the world's first vegan Michelin-starred restaurant) and the Weinsinn.

In addition to the old acquaintances, however, there are also two new star restaurants in Frankfurt in 2022: There is, on the one hand, the 53. Floor located Maintower Restaurant. The Guide MICHELIN could convince not only the spectacular view of the city, but also the cuisine. It is especially the combination of Asian influences with high-quality products, which makes the modern menu with four to seven courses so successful. Also receiving a star is Masa Japanese Cuisine on Hanauer Landstrasse. The team from Guide MICHELIN is thrilled with this great address for Japanese cuisine, raving about dishes "full of finesse, flavor and expression that move between Japanese classicism and modernity, and in some cases reveal European influences."

We congratulate all the teams at these restaurants for honoring their achievements! For more info on all the starred restaurants across Germany, visit:https://guide.michelin.com/en/article/michelin-star-revelation/guide-michelin-germany-2022-all-star-restaurants