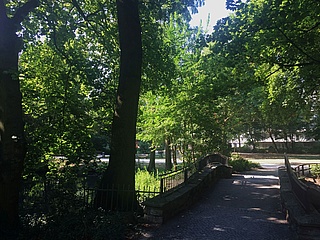 (ffm) Horticulturalist Ingo Bohl will lead a guided tour on Sunday, 5. August, at 2 p.m. from Von-Bernus-Park to Friedrich-Ebert-Anlage.

The Von-Bernus-Park in Bockenheim, only 1.5 hectares in size, surprises with its dense green of meadows and shady, exotic trees. The pond in the middle of the park magically attracts visitors. An old stone bridge crosses the narrowest part of the pond. The park was laid out in 1771 for the Baroque palace of Princess Henriette Amalie of Anhalt-Dessau. The palace was destroyed by bombs in 1945, but the park was preserved with its valuable trees such as the Christusdorn, tulip tree or hickory nut. From this quiet and enchanted gem, Ingo Bohl leads us to the flowering splendour of the Friedrich-Ebert-Anlage. Colourful perennial beds adorn the square opposite the exhibition centre: pastel-coloured tulips as well as daffodils and alliums in spring, peonies, cranesbills and astilbes in summer and magnificent asters in autumn.

The guided tour is an event organised by the Parks Department as part of the GartenRheinMain annual programme. The meeting point is at the entrance to the Westbahnhof S-Bahn stop. The free guided tour lasts about two hours. Registration is not required