Hand-rearing among bonobos. And then?
from FFM Aktuell 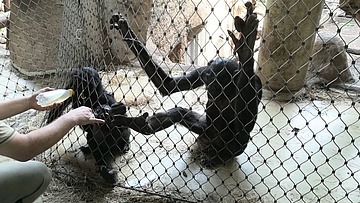 (ffm) Two bonobo cubs had to be raised by keepers at Frankfurt Zoo in recent months. One cub has since been reintegrated into the bonobo group, the other is yet to do so.

The two bonobo cubs born in December 2017 and April 2018, Xhosa and Yango, were not adopted by their mothers. In consultation with the studbook coordinator, it was decided to take the cubs out of the group for the time being and have them raised by the keeper team. This is a decision that needs to be considered very carefully, as zoos reject so-called hand-rearing for most animal species. The reason: wild animals raised by humans do not know many of the typical behaviours of the species and often have problems later in life getting along in a group or raising their own young. In some cases, it is not possible to integrate hand-reared animals into the groups of their conspecifics or to mate them.

Hand-reared animals are especially problematic in many mammal species. "However, for some highly endangered species, such as bonobos, you have to weigh the risks and harms to the animal against the benefits to the species. There may be good reasons to opt for human rearing. However, it is important to reintegrate the young into the original group as soon as possible," explains zoo director Miguel Casares.

Frankfurt Zoo is in close contact with not only the studbook but also EAZA (European Association of Zoos and Aquaria) and VDZ (Verband der Zoologischen Gärten) when making such important animal management decisions. In the case of the two bonobo cubs, the decision was made collectively here to dare to breed them. "Frankfurt Zoo has an excellent reputation in ape husbandry," explains Casares. "And our great ape keepers - Head of Precinct Carsten Knott and his team - have a lot of experience with the reintroduction of bonobo cubs. No other zoo in the world has this kind of long-standing expertise. In 2004, Frankfurt succeeded, for the first time in the world, in integrating a young animal into the group already at the age of three months," says the zoo director.

In total, five bonobo cubs have already been successfully reintegrated into the group in Frankfurt via the cooperative rearing method. In this process, the young animals are only completely in the care of their keepers for the first few months, and even during this time, contact with conspecifics is always maintained. Great apes have a nursing period of about three years and are cared for by their mothers for a long time. Without contact with conspecifics during these early years, no species-specific education can take place. It is therefore important that keepers and apes work together to care for unadopted young. In this case, education is provided by conspecifics and care by humans is limited to what is absolutely necessary.

Xhosa was born on December 21, 2017, his mother Kamiti nursed him for six days, everything looked good at first. But then the little one started getting weaker and weaker. The zoo team decided to examine the cub. It was nursed for 14 days and then returned to its mother, because Kamiti is known to be a good mother. But this time she did not accept her baby back and Xhosa was bottle-fed. "Bottle-fed babies can't rejoin the group until they sleep through the night, and that's at about three months," Knott explains. The mother or foster mother has to bring the cub to the grid to drink, and here it receives the bottle from the keeper team. Knott and his team trained the bonobos daily. The females in particular received rewards if they stayed at the bars for a longer period of time. The young animal was always kept in close contact with its conspecifics. On 13 April, Xhosa slept through the night and another integration attempt was made, but this time unfortunately with a bad outcome. The cub was attacked and had to be taken out of the group again injured. "We couldn't have expected that," Casares says. "In the past, something like this has never happened, but it shows us that we can never assess the animals one hundred percent and that reintegration always involves risks." After the cub had fully recovered, another integration attempt was made last week. This time it succeeded, albeit differently than expected, as none of the females, including the mother, accepted the cub. Six-year-old Sambo, however, took a surprising interest in Xhosa and has been carrying him ever since, bringing him to the bars to drink. Sambo was also bottle-fed at the time.

Yango was born on April 17. His mother, Zomi, took care of him but would not let him drink, so the little one had to be taken out of the group two days after birth severely hypothermic. Yango is still too young to be reintegrated into a bonobo group. Together with the studbook and the VDZ, various options for the further procedure are currently being examined. It is by no means out of the question to reintroduce Yango into the Frankfurt group. An alternative is to release him to another zoo where he will be matched with a suitable foster mother.

"Two hand-reared animals in such a short time is a Herculean task for us," explains Casares, thanking his team for their great commitment. At the same time, he is happy to report that hand-rearing is the exception among great apes. "As a rule, female bonobos are excellent mothers. So Bashira is also raising her cub, also born in December 2017, independently and without any problems."