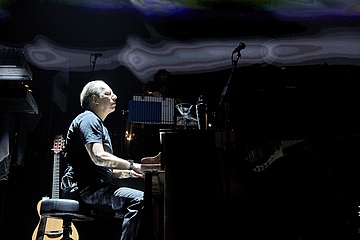 Hans Zimmer is undoubtedly one of the most successful and influential composers of contemporary film music. Few styles are so often copied as the one with which Zimmer has musically enhanced numerous blockbusters such as Christopher Nolan's "Dark Knight" trilogy, "Gladiator" or "The Lion King". A look at Zimmer's body of work to date, however, shows that he can't really be pinned down to a particular style at all, that he's always evolving and reinventing himself. His works for "The Ring", "Caribbean Pirates", "The Narrow Grade" or "It Doesn't Get Any Better" are just some of the testimonies to this thesis. Winner of multiple awards and hotly sought after by filmmakers - Hans Zimmer has really done it.

From a boy from a small town in the Taunus region near Frankfurt am Main to a brief guest appearance as a pop star with the song "Video kills the Radio-Star" to his first attempts at film music and finally his breakthrough in Hollywood with the soundtrack to "Rain Man" - a work with which Zimmer remains dissatisfied to this day - the life and work of Hans Zimmer show an incredible number of facets. He finally presented an overview of them in front of a live audience on a major tour in 2016. The experiment of going on the big stages with band, choir and orchestra was so successful that the concerts in Europe were almost completely sold out. That's why there will be a follow-up in 2017.

The 2017 European tour will then also take Hans Zimmer back to his native city of Frankfurt, where he will present a spectacular concert with some special guests at the Commerzbank Arena.

Further info about the concert on 09 June in the Commerzbank Arena can also be found <link https: www.frankfurt-tipp.de veranstaltungen s event hans-zimmer-live-on-tour-2017.html _blank>HIER in our event calendar