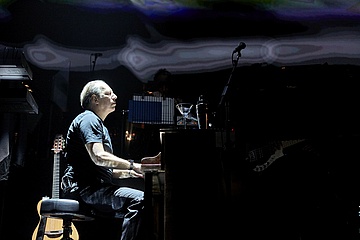 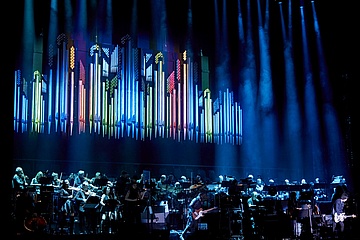 "Hello you Frankfurters!" With these words Oscar winner welcomed the nearly 19,000 fans who had come to the Commerzbank Arena to listen to the master's film music highlights live. He immediately followed up his greeting with the remark: "I am also a Frankfurter!" Zimmer was born in Frankfurt in 1957 and spent his childhood in a small town in the Taunus region before it later carried him out into the world, where he then became one of the most successful and influential composers of contemporary film music. His teachers here would certainly not have thought so, for he was not a particularly well-behaved pupil and, as he told the Frankfurt audience with a mischievous smile, had often been expelled from various schools. Nevertheless, he was visibly moved to finally be back in the city of his birth after almost five decades - and then in the Commerzbank Arena in front of thousands of enthusiastic fans. A home game couldn't have looked any better.

In the first part of the concert, Zimmer - wearing the Eintracht jersey as befits the occasion - and his first-class musicians gave a fine overview of some of his best works, from "Miss Daisy and Her Chauffeur" to "The Da Vinci Code" and "Sherlock Holmes". The first big goosebump moment came during the medley to "Gladiator," which also featured singer Lisa Gerrard on stage, whose great voice held its own even against the brief heavy rain that fell over the arena. But that wasn't the only special moment the audience in Frankfurt was treated to. Because suddenly the legendary producer Trevor Horn did the honours on stage, who presented the hit "Video kills the Radio-Star" with Zimmer - that pop song they once presented as The Buggels as the first music video ever on MTV before Hans Zimmer went to Hollywood. It was a very amusing, but somehow also moving interlude - especially since the two had never performed this song together before.

The next goosebumps were caused before intermission by cellist Tina Guo, whose intense playing made the "Pirates of the Caribbean" medley a great experience for the eyes and ears. This first part of the concert made it impressively clear that Hans Zimmer does not really allow himself to be pinned down to a particular style, that he is always developing and reinventing himself. And this impression was reinforced after the intermission. Because then, at the latest with the pieces to "The Amazing Spider-Man 2" and "The Dark Knight", the whole thing turned into a real rock concert. When the magnificent Satnam Singh Ramgotra and Holly Madge had a drum duel, or Guthrie Govan hit the strings of his guitar, the Commerzbank Arena roared with power. And with "Interstellar" it became downright psychedelic. At the latest after this second half of the concert nobody could claim that there is a typical Hans Zimmer style.

When you realize after this journey through almost thirty years of film music, which changes Hans Zimmer's work has experienced again and again, you can be very curious how this exceptional composer will ennoble many a Hollywood blockbuster in the future. And after the almost three-hour show, we are left with the hope that it won't be decades before Hans Zimmer visits his old home again. For as he said so beautifully about the time when he was working on a soundtrack in Paris: "Paris may be beautiful. But Frankfurt I carry in my heart!"