Happy Birthday - 150 Years of the Palmengarten
from FFM Aktuell 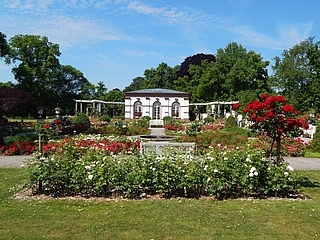 This is an anniversary that should actually be celebrated with a really big bash: today, Tuesday, March 16, Frankfurt's Palmengarten turns a proud 150 years old. Of course, a huge celebration is not possible at the moment. Nevertheless, the anniversary year will of course be celebrated appropriately. "Admittedly, despite our Corona-related closure, time has not stood still, everywhere in the garden has been hard at work. We have all been waiting eagerly to be able to reopen and are all the more pleased that we can let our visitors in on time for our birthday. Despite the pandemic and the correspondingly difficult parameters, we have come up with a varied anniversary programme for them," says Palmengarten director Katja Heubach and gives a small preview of what can be expected in the coming months.

One of the highlights is, of course, the opening of the Blossom and Butterfly House (BSH), which is planned for the summer. At the launch, there will also be an information exhibition here entitled "Dusted off! About flowers and their visitors". New educational offers will take up the theme and transport it out of the BSH into the field. There will also be a major anniversary exhibition, artworks of various genres will make their way into the garden, and fans of jazz, blues, singer-songwriters and chamber opera can look forward to the music season. Those are some nice prospects.

The anniversary program is meant to reflect exactly what the Palm Garden has stood for for 150 years: Nature, Biodiversity, Civic Engagement, History, Education, Recreation, Pleasure, Culture. "A unique melange that we owe to the Garden's founder Heinrich Siesmayer and all his successors* who further developed the Garden with innovative ideas," says Head of the Environment Rosemarie Heilig. "The Palmengarten is a wonderful park with a variety of offerings, perhaps even the most beautiful place in Frankfurt." We agree with this opinion.

But the Palmengarten also aims to educate, for example about the relevance of insects for the environment, agriculture and nutrition. "No Bees, no Bembel", says Katja Heubach and explains: "Fans of Frankfurt's national drink will understand immediately: Without a bee to pollinate the apple blossom, no apple and ergo no cider in the Bembel." The Palmengarten has chosen this interplay between insects and plants, in short flower and pollinator ecology, as its new guiding theme. Heubach says, "Its focus is in the new flower and butterfly house. Our guests will also encounter it in many other places in the Palmengarten and Botanic Garden, as well as in our new educational offerings."

The great anniversary exhibition offers a time travel through 150 years of Palmengarten history. But that is not all. It also provides insights into the themes of garden art, the botanical and horticultural collections through the ages, splendour and hospitality, music in the Palmengarten, sport and play as well as education and commitment. A future workshop ventures a look into the next 150 years. In the open air, historical visual axes illustrate how the Palmengarten has changed: At prominent points, stations with historical images invite direct comparison with today's visual axes.

Sound installations by Lasse-Marc Riek offer special acoustic insights into the world of animals and plants under the heading "Transformations" at various points in the garden. On the playground, the walk-in pavilion "imd_plant transistor" is being created under the same theme in cooperation with the Institute for Material Design at the Offenbach University of Applied Sciences. July sees the start of the music season, and from November onwards butterflies will once again play a leading role. The photo exhibition by Ingo Arndt "Hochstapler, Trunkenbolde und Schnüffler - verrückte Schmetterlinge" (impostors, drunkards and snoopers - crazy butterflies) holds many exciting secrets and stories about these creatures.

Visitors who want to delve into the history of the Palmengarten should read the anniversary volume "Der Palmengarten. Wo Frankfurts grünes Herz schlägt", which will be published at the beginning of April. In it, author Sabine Börchers illuminates both the beginnings of the garden and how it sees itself today. He looks behind the scenes, meets people who are connected with it and takes a look into the future, in which the Palmengarten as a botanical garden must face new challenges in times of climate change. The anniversary magazine "The Blooming Life" reports entertainingly on garden history and stories, current topics in the anniversary year and is dedicated to those who shape the Palmengarten in terms of gardening and content. In addition, the new website http://www.palmengarten.de went online just in time for the anniversary. "And also the Westend subway station is now called 'Westend (Palmengarten)' - a great gift from the city for our birthday. You can virtually say there's no way around the Palmengarten anniversary," says Heubach. "The History Museum is also honoring our birthday. As part of the exhibition 'The City and the Green - Frankfurt Garden Lust', which will be on display from 25 March," explains the Palmengarten director.

You can find all further info at: http://www.palmengarten.de

On this note, once again from us a very warm: Happy Birthday, Palmengarten