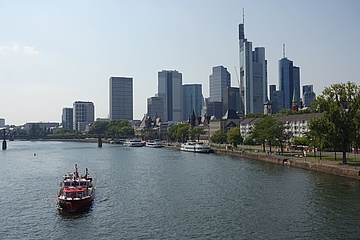 (ffm) In September 1970, the fire-fighting boat - known as the FLB for short - went into service in Frankfurt am Main. Many may know the red and white ship with its impressive water fountains mainly from events. Over the past half century, the FLB has played a decisive role in a number of operations and still has an important function today. Because the city is changing and because it is becoming increasingly difficult to find spare parts, in the year of the anniversary they are also thinking about the future of the old-timer.

At just after seven on a July morning this summer at the Niederräder landing stage, the crew routinely puts on life jackets and last hand movements. They get themselves and the Frankfurt fireboat ready for the training trip "uphill", to Seligenstadt. With a deep rumble, the two main engines wake up, two lines are still released and then the approximately 30-meter-long, six-and-a-half-meter-wide and already countless times red-and-white painted boat with its impressive water cannons is carefully steered off the jetty.

"FLB 41/77-1 en route for route reconnaissance, upriver," Dennis Windgass, the young chief fire officer, announces by radio to the fire department's control center from the helm: "So that the colleagues know that the boat is underway in case of an alarm." Over the next few hours, the twin-screw boat with around 1400 hp works its way up the river Main kilometer by kilometer and barrage by barrage. Those who are not steering through the channel as helmsmen - assisted by radar, river charts and instructors - are on deck memorizing sections of the river, harbors, industrial plants and helping with the locks as deckhands.

The fireboat's area of operation extends beyond the city limits to Ginsheim-Gustavsburg at the mouth of the Rhine, and in the other direction it went as far as the Bavarian border until recently. For the last two years, Hanau has had a somewhat smaller rescue fireboat (HLB). When that is serviced or needs support, the sister from Frankfurter is always in demand. "The missions are not very frequent, but when it comes down to it, the FLB is irreplaceable," explains Windgass. The 31-year-old fireboat machinist has been part of the Springer FLB crew for five years. The boat is manned by the service groups of Station 41 in Niederrad in a jumper function only from the moment it is alerted.

"In addition to the main task of firefighting, the boat can tow damaged ships free, bring passengers and crews to safety. It's there when oil leaks from tankers. A few years ago, we acted as icebreakers to help frozen police boats in the East Harbor," Windgass said, describing the range of operations. "On our stretch of Main, we have plenty of industry, large oil storage facilities. When you look at how much hazardous material is traveling by ship, a boat like this is very important. Also, with the increasing number of passenger ships on the Main, the FLB is an important rescue tool." The fireboat crew also helps rescue or recover people from the water. The FLB is also called out more often to assist in major fires, providing firefighting water from the Main - as was the case most recently when the "Blaues Wasser" restaurant on the banks of the Main near the Offenbach lock burned out.

The fireboat was purchased in 1970 after a number of fatal accidents and near-disasters in the German inland waterways at a cost of 1.3 million deutschmarks at the time. The farsighted decision quickly proved to be the right one: less than six months later, the boat helped out in a devastating major fire at the Linde refrigeration plant in Mainz-Kostheim. A few months later, a tanker exploded first in Raunheim and then in Offenbach harbour, and the fireboat came to the rescue with its foam cannons. The fire at the Frankfurt Opera House in 1987 is also a sad milestone in the history of the fireboat. It ensured the fire water supply here, just as after the collision of two freight trains in the south station in 1997.

In the course of time, it was modernized piece by piece. The old driving position with wooden steering wheel gave way to an ergonomic solution. Since then, the skipper has the radar screen in view and can operate the two main engines and the four wing rudders by rotary lever. The large foam and water guns on deck are easier and safer to handle and offer more foam types and spray strengths. Searchlights were added, as well as a four-ton hydraulic telescopic crane at the stern, which the FLB can use to recover sunken cars or pleasure craft from the Main River.

Despite everything, the fireboat is now an old lady. Maintenance is expensive, spare parts are hard to come by. Windgass and his colleagues do small repairs and maintenance work themselves when they are not on duty in the fire truck, rescue vehicle or on the water. "There's actually always something to do, but I love doing it," Windgass says. "As a child, I was already taken with the little fireboat in the Flörsheim am Main volunteer fire department." Before training as a firefighter, he worked as a master automotive technician in a classic car repair shop. "So it's a good fit that I'm now here with responsibility for the Frankfurt fireboat," he says and grins.

Before the Mühlheim barrage, a request from the lock staff is heard over the on-board radio: "There has been a missing person for two days according to the police. Can the crew please keep an eye out in the water immediately before and after the lock. Just for safety. Thank you." Windgass heads for the lock chamber extremely slowly. A ship, unlike a land vehicle, can't just brake like that - certainly not when it weighs 150 tons.

"It's been known to happen," he says of the request for help. He later reports "negative" to the lock. Locking takes time. Gate open, in, gate closed, water in, gate open, out - that's at least 20 minutes. But only without traffic jams or oncoming traffic. If the FLB has to go into action, it has right of way like the fire engines on the road, however.

On the way back towards Frankfurt, the crew practices with the rescue tender and the handling of the various water cannons. Up to 18,000 liters of water per minute can be thrown 90 to 120 meters. By way of comparison, 400 litres per minute usually come out of a standard fire engine hose. The foam guns remain untouched today, but if necessary - for example, in the case of a fire on a tanker - they perform remarkable: Converted, they could cover a football field about seven meters high with foam.

The Frankfurt skyline comes back into view. In the city area, the word is to throttle back speed to the max. The wave made by the fireboat can make rowing boats and standup paddlers uncomfortable. In the late afternoon, the boat and crew moor again in Niederrad. The rescue speedboat of the Frankfurt Fire Brigade is also moored there. Because of its high speed and manoeuvrability, it is used more often than the fireboat for rescuing people and is permanently manned by two firefighter colleagues and, if necessary, by an additional lifeguard. Everything belongs to the guard 41 on the other side of the street Am Niederräder Ufer.

In addition to a certain number of task forces and vehicles, most of the twelve locations of the professional fire department have their specialties. Elsewhere sit, for example, the height rescue or the special service environment and safety. Here it is the water rescue in cooperation with the divers of the station 40 in the Ostend. Thomas Schmitt, the watch commander in Niederrad, sits in his office with Dieter Ebert, one of the first skippers of the fireboat 50 years ago. They are looking at photo albums with old photographs. The retiree talks about the missions in his 33 years on the ship as if it were yesterday and is proud that it is still in operation: "It is just even after so many years still one of the most powerful boats of its kind."

The watch commander nods. In the fire department's own foresight, however, Thomas Schmitt is also thinking about the future at the moment: "We are currently preparing a new and comprehensive needs analysis. What hazard scenarios are there today? And does the FLB fit in, or do we need other solutions? What will change as a result of housing being built close to the shore? By more passenger shipping?" What needs will emerge from the analysis, and what that means for the red and white fireboat, is far from a foregone conclusion. Windgass and his colleagues have moored the boat and are finishing their training service. For quite some time, the fireboat will undoubtedly continue to be maintained and reliably protect the city and its stretch of river from the Main.

On its maiden voyage

On Thursday, 3. September, the fireboat will "repeat" its historic maiden voyage: between 2 and 2:30 p.m., the FLB will sail to the Iron Pier, exactly 50 years after the boat's first voyage. The boat will also present its famous water fountains there in front of the skyline.

A number of information boards with historical photos and texts about the fireboat will be temporarily installed at the Niederrad boat landing. So interested Mainufer passers-by can inform themselves about the ship and its history. (Text: Anne Walkembach)