Hard lockdown: This applies from Wednesday in Hesse
from FFM Aktuell 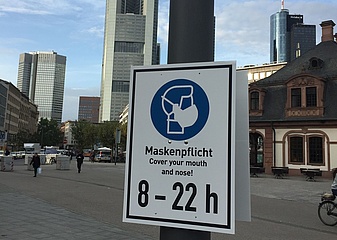 Now it is so far: the lockdown light has not worked as a breakwater and the infection numbers are shooting up again for days. Therefore, from Wednesday, 16.12.2020, there is a hard lockdown, which then also affects the retail, which was previously allowed to remain open. All in all, public life is to be shut down as much as possible. And for that to have the desired effect, it's up to ALL of us! Even if we don't like it, even if it annoys and frustrates us, even if some still don't believe in the dangerousness of the virus - now is the time to show real solidarity. Only then can we prevent gastronomy, commerce and culture from being closed in the long term.

"Hesse remains prudent and confident," said Minister President Bouffier in his government statement on the further course of action in the Corona pandemic. He explained in a press conference what restrictions will apply from Wednesday - and also over Christmas and New Year's Eve . until January 10 for the time being.

The rule remains: private meetings will continue to be limited to one's own household and one other household, with a maximum of five adults and any number of children under 14 allowed to meet.

Will also be closed starting Wednesday are hair salons, beauty salons, massage parlors and tattoo parlors will have to close. However, medically necessary treatments such as physiotherapy, occupational therapy, logotherapy and chiropody will still be allowed.

From Wednesday, Dec. 16, until Friday, Dec. 18, 2020, compulsory attendance at schools in Hesse will be lifted. Children should stay at home if possible. If this is not possible - for example, because both parents are working and another care can not be organized, the children can also go to school until the Christmas holidays. This also applies to daycare centers. Here, emergency care applies to children who cannot stay at home.

Federal and state governments are asking employers to close workplaces from December 16 to January 10, if possible. This is to be ensured either by company holidays or by switching to home offices as completely as possible.

The contact restrictions will be relaxed a bit from December 24 to 26. In addition to your own household, four other people from your immediate family, such as siblings or parents, other close relatives and domestic partners, will be allowed to meet. Children under 14 are not counted here either.

Bouffier thereby appealed to all people in Hesse to limit themselves to only the most necessary contacts, even on the holidays. Since there will of course be no "Polizeikontrollen under the Christmas tree", he put on personal responsibility. Hopefully this will be adhered to - otherwise there will be an increased incidence of infection again at the beginning of January and the likelihood of relaxations from 10.01. would then be even less than it is now. As painful as these restrictions are, we must realize that there is no way around them.

On New Year's Eve, the stricter restriction of five people from a maximum of two households will again apply. Very importantly, celebrations and gatherings in public are not allowed. In addition, the sale of fireworks before New Year's Eve is generally prohibited.

The drinking of alcoholic beverages is no longer only prohibited in central places, but in the entire public space from Wednesday. Violators will be fined.

Worship services are to be allowed under strict conditions. For this, the state government will consult with the churches in Hesse at the beginning of the week. Solutions are to be worked out as to how church services can be held during the Christmas season - and especially on Christmas Eve.

The virus is also raging particularly badly in Hesse in old people's and nursing homes. Among other things, this is to be countered with increased testing. For visitors in regions, which belong to the so-called hotspots due to a 7-day incidence, the proof of a current negative Coronatest is to become obligatory. However, visits are not to be banned in general.

Federal and state governments are advising citizens to cancel nonessential travel at home and abroad. Those entering from a foreign risk area must register digitally and be quarantined for 10 days. This can be ended at the earliest after five days by a negative test.

Financial aid for businesses is being expanded by the federal government. In the bridging aid III, which applies from January, the maximum amount is increased from 200,000 euros to 500,000 euros, whereby fixed operating costs are eligible for reimbursement. Other aid, such as for the retail sector and for businesses affected by the closure , will be discussed in a timely manner.

Still open details are to be clarified at the next meeting of the Hessian Corona Cabinet on Monday. How to proceed after January 10 is to be discussed in the new year on January 05. We hope that this hard lockdown will have a better effect and that we may even be able to look forward to the first relaxations as early as 11.01.2021.