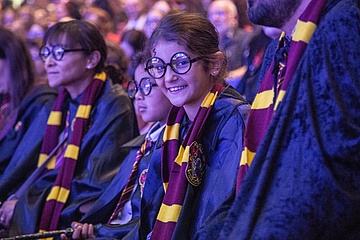 It's hard to believe, but it's been twenty years since the first HARRY POTTER volume was published in Germany. And as in other countries where the anniversary has already been celebrated, the 20th birthday of the popular book series was of course also duly celebrated in this country. The Frankfurt Book Fair naturally provided the perfect stage for this. This is where Carlsen Verlag held Germany's biggest official fan meeting on Saturday, 13 October, and also dared to attempt a world record. In the large hall of the Congress Center at Messe Frankfurt, the aim was to bring together the largest number of Harry Potters in one room. The record of almost 1,000 magic students was set in Australia. The aim now was to beat that in Frankfurt.

The conditions were very good: hundreds of fans dressed as Harry Potter came together to celebrate J.K. Rowling's books and the literary heroes of the world of witches and wizards. Carlsen Verlag provided a varied entertainment programme with magical surprises. The guest of honour was the Milanese book artist Iacopo Bruno, who has lavishly designed the new edition of all the Harry Potter volumes that has just been published and signed many fans' books on the spot. And during a big quiz it quickly became clear that the stories of Harry, Ron, Hermione and Co. still fascinate children, teenagers and adults - just as they did when the series started two decades ago.

Despite great disguises and a good atmosphere, the attempt to set a new world record with more than 1,000 people dressed up as Harry Potter fell short by about 100 participants. However, Olaf Kuchenbecker of the Record Institute for Germany (RID) officially confirmed the national record for Germany with 887 participants. Now that's something, isn't it?

Renate Herre, publisher of Carlsen Verlag, was therefore also visibly in good spirits: "Even though we weren't able to top the existing world record today, I'm very impressed by how many fans have gathered here today to immerse themselves in the world of Hogwarts together, to celebrate the bond with their literary heroes and to share their love of J.K. Rowling's books. It was a matter close to our hearts to honour the 20th anniversary of Harry Potter and its unique success story in a special setting. We have undoubtedly succeeded in doing so today." The many fans present could only agree with her there.