Hassan Annouri: At Deiters dress for the Frankfurt Oktoberfest
from FFM Aktuell 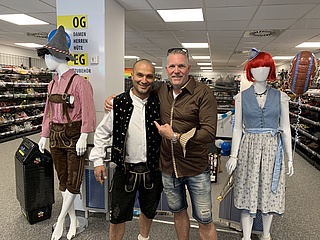 Kai Mann, co-organizer of the Frankfurt Oktoberfest is sure: When 07. September 2022 - almost 3 years after the end of the last Frankfurt Oktoberfest - is opened in the marquee at Deutsche Bank Park, then the mood will boil over. People have an extreme need to catch up and are already looking forward to the return of the event, which is also proven by the advance sales figures: since the start of advance sales just under six weeks ago, 35,000 tickets have already been sold for the evening events and Frühschoppen. To do justice to this anticipation, Kai Mann and his team came up with something very special for the sold-out opening: After the marching in of the festival hosts and the traditional tapping of the barrel, the musician, producer, restaurateur and radio presenter Hassan Annouri will appear and perform his new Frankfurt anthem "Wir sind alles Frankfurter".

Annouri is looking forward enormously to being allowed to perform his musical declaration of love for our beautiful city at this great Frankfurt event. However, he had to confess when asked by Kai Mann, he didn't have a suitable outfit for the opening night. No problem, because at Deiters at Konstablerwache, everyone who does not yet have the right outfit for the Frankfurt Oktoberfest is in good hands. So, too, Hassan Annouri, who picked out the perfect outfit for his big appearance on September 7 at the official clothing sponsor of the Frankfurt Oktoberfest. With the support of Kai Mann and the team of Deiters was then also quickly found.

"I feel really good," said Annouri about his outfit. To stand in it on stage and celebrate together with many people, while he sings his anthem, that will be already something very special. Kai Mann is also convinced of that: "In the festival tent, even the guests who come from other cities feel like Frankfurters!" There this local-patriotic hymn fits simply perfectly.

After the opening with Hassan Annouri and Mickie Krause as main act, still 21 further meetings follow, with which the tendency is to become not less great. Of course, acts like Oli P., the Weather Girls, Roy Hammer, NDW star Markus, Jimmie Wilson or even Bernhard Brink will make sure of that. The organizers are also prepared for possible Corona regulations. If the 3G regulation is reintroduced, there will be a test center in front of the marquee. However, Kai Mann does not want to think about even stricter restrictions. "Now it's time to look positively ahead," he says after successfully dressing Hassan Annouri.

Tickets for the Frankfurt Oktoberfest are still available at www.frankfurter-Oktoberfest.de, at all advance booking offices or on the ticket hotline 069/407662580. And if you want to look for a suitable outfit yourself at Deiters, you can drop by the store on the Zeil (number 46, next to C&A) from 10 a.m. to 8 p.m. Monday through Saturday.