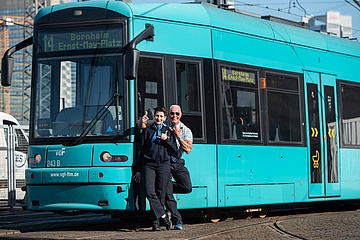 (ffm) If the biographies of VGF employees were a collection of stories about Frankfurt, then the marriage of Peter and Heike Wirth would be a love story about this city. Frankfurt's longest-serving tram driver couple met 39 years ago at dance lessons, have been married for 34 years and have now been driving trams for 31 years.

Peter and Heike Wirth's working life takes place between two terminus stations, between which their paths cross several times a day, depending on the route. Whenever Heike and Peter meet on the line, they throw each other a kissing hand - and look forward to finishing work together. The duo, who seem so different at first glance, never get bored at work. The job is far too eventful and varied for that, they say. "We arrange our duty rosters so that we work the same shift," explains Heike Wirth, who started her job as a railway driver in Frankfurt in February 1988. After the Bundeswehr, her husband Peter first trained as an electrician, then drove a taxi for a while and finally followed his wife into the driver's cab of the VGF trams.

"Even back then, when I was still driving a taxi, Heike drove her tram past my taxi stand several times a day," says Peter Wirth, flashing his broad grin. Frankfurt has changed radically since 1988. Thirty years ago, it had 625,000 inhabitants. Now over 125,000 more people live in the city. On weekdays, Mainhattan even swells into a metropolis of millions. Of course, the tram drivers also notice this: "The fact that so many people now live in Frankfurt also has an effect on traffic discipline. The streets are much more crowded than they used to be and we have to be extremely careful to get through the city without an accident," says Heike Wirth. Above all, car drivers and cyclists who run red lights, people who look at their mobile phones instead of the road, and ambulances roaring through the city with sirens are giving the tram drivers a hard time.

With the city and its population, the VGF's network of lines has also grown considerably. On central sections in the city center, the trams now run every minute. In order to maintain a balance between punctuality, consideration for traffic and customer friendliness, the greatest concentration is required. "Of course we wait as long as possible when we see that someone else is coming and wants to get on. But at some point we have to close the doors and drive off," says Heike Wirth, asking for understanding from all passengers who have once again missed their tram by a few seconds. The experienced tram driver assures, however, that neither she nor her colleagues intentionally left a passenger standing at the stop.

"When I drove through Mainzer or Hanauer Landstraße at the end of the 80s, there were many industrial companies there. Today there are modern apartment blocks everywhere," Wirth says. The man, known mainly to younger VGF passengers as the Bahnbabo, is an imposing figure. With his mirrored aviator sunglasses, weight-strengthened upper arms and raspel-short hair, Wirth has been the undisputed darling of the public among Frankfurt's tram drivers for several years. The fitness fanatic has been strength training for over 30 years and mixes smoothies and protein shakes with his wife after work. But strength is not everything for Peter Wirth - to demonstrate his suppleness, he performs an impromptu splits - and afterwards emphasizes that a strong man solves his problems not with muscle power, but with brains.

We regularly speak to his passengers via the on-board microphone, wishing them a nice day despite or because of the weather, pointing out detours or rejoicing with them that once again his wife is driving past him. This communicative and relaxed manner goes down well with customers - on social media, Peter Wirth is a real star who is regularly asked for selfies. "I simply enjoy this kind of socialising. Even back then, when the driver's cab wasn't separated from the rest of the carriage by a door, I enjoyed talking to my passengers - even if that's actually forbidden," says Peter Wirth, snapping his Bahnbabo grin.

Seeing the world - falling in love with Frankfurt

."My favorite thing to do is to ride Line 11 from Fechenheim to Höchst - that's real life," he says of that line, where his skills as a conflict mediator have been called upon from time to time. "If someone doesn't behave in the tram or refuses to take his feet off the seat, I sometimes show him my splits. After that I have his respect because he realizes that I'm a stable guy." Heike Wirth also doesn't mind a chat with her passengers - but she takes it easier in the driver's cab than her husband. "My favourite lines are the 15 or the 18 - preferably on Sundays when it's nice and quiet," she says. Afterwards, Heike Wirth likes to finish off the evening with a load of woolen balls, from which, her husband credibly assures her, she makes veritable works of knitting art.

As different as the Wirths may seem at first glance - in their private lives they have been living completely in line for over three decades: together the duo has travelled almost the whole world - but the two, who also live in the heart of the Main metropolis, simply can't get enough of Frankfurt. With the exception of a one-year guest performance in Offenbach in 1992, the Wirths have lived in Frankfurt since their youth. And one thing is certain: Until they retire, Heike and Peter Wirth will continue to sit in the driver's cab of their trams for the VGF, bringing their passengers safely to their destinations on time and throwing each other a kiss.