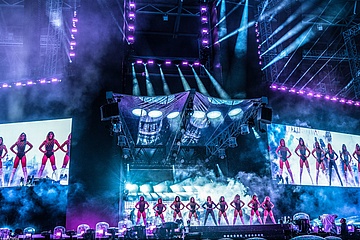 What a concert. On one of the hotter days of this already far too warm summer, it got quite a bit hotter at Frankfurt's Commerzbank Arena. Because Helene Fischer made a guest appearance here as the penultimate stop on her current stadium tour. With a spectacular show she heated up the Frankfurt audience and gave them goose bumps. But the show started punctually at 7:30 pm with shooting star Ben Zucker. With his smoky voice he sang a few of his songs, including the hits "Na und" and "Der Sonne entgegen", which created such a good atmosphere in the arena that you could forget for a moment that he was only the opening act. About half an hour lasted the successful performance of the likeable singer, before then around 20:40 Helene Fischer finally entered the stage.

Whoever now expected to see a variation of her arena tour show was in for a surprise: a completely new program was put together for the stadium tour, both in terms of song selection, arrangements, stage design and choreography. And while other artists only let it rip at the finale with confetti rain and fireworks, Helene Fischer just started her show like that. No wonder that already at the first song "Flieger" the mood had reached a first peak. For the visitors who had found themselves in one of the numerous traffic jams around the Commerzbank Arena on their journey, such as on the A3, where at times nothing worked at all, the annoyance and heat were forgotten by now at the latest. However, with all the joy about a successful concert, it should not be forgotten that the behavior of some concertgoers who walked along the autobahn towards the stadium or parked on the makeshift access road was extremely risky and reckless, not only for themselves. You can read more about it HERE

Those who didn't get a seat at the stage could enjoy the first medley, during which Helene Fischer drove on a car once around the interior of the Commerzbank Arena and thus also got close to fans in the back rows. After more hits like "Und morgen früh küss ich Dich wach" or "Von hier bis unendlich" then the first surprise: a sensual version of the Matthias Reim hit "Verdammt ich lieb Dich", which made many a fan sweat. After that it was party time as the audience was taken back to the 90s with a medley of hits like "What is Love" or "Rhythm is a Dancer". The arena seemed to really explode here.

.and for goosebumps in the stadium

But it also went quite differently, as Helene Fischer proved in the goosebump duet with Ben Zucker. Their joint version of Marius Müller-Westernhagen's "Freiheit" turned the Commerzbank Arena into a sea of lights. "Goosebumps from head to toe," said an enthusiastic concertgoer next to us - we can only agree. With "Wir brechen das Schweigen" and the mega-hit "Atemlos" the tempo was then picked up again and the noise level of the screaming fans increased steadily until the concert was brought to a brilliant conclusion with crowd favourites such as "Herzbeben", "Mit keinem andern" and the finale "Achterbahn".

Helene Fischer's stadium tour was again great cinema. Not quite as spectacular as the arena tour, but thanks to a very varied song selection of old and new songs, as well as some cover versions, great choreographies, pyro and lighting effects, this show was also nothing less than spectacular. The fact that traffic jams and full lanes awaited many visitors again afterwards was well worth the experience.

And with these songs Helene Fischer thrilled her fans:

Fireworks / In the middle of paradise / One hundred percent

From Here to Infinity

Damn I Love You

Rhythm Is A Dancer / What Is Love? / I Like To Move It

We Break the Silence

I wanna feel that fever again and again

Hell in the morning

With no one else