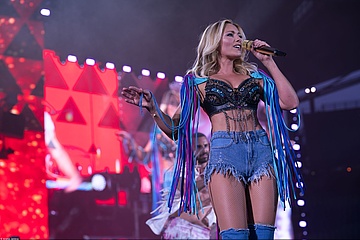 No matter what you may think of her music, you have to create something like this first: Not only did Helene Fischer completely sell out the Festhalle five times with her arena tour in the spring, now she's coming to the Commerzbank Arena just a few months later with a completely new stadium show - and has already almost sold it out again. Respect. The arena tour in winter was a really spectacular show, put on stage together with artists of Cirque Du Soleil. You can read our editor's impressions HERE.

So on July 20 Helene Fischer will come to Frankfurt again. As thousands of fans are expected at the Commerzbank Arena for the concert, which will be opened by shooting star Ben Zucker at 19:30, traffic obstructions are almost unavoidable. So you should be prepared for full suburban trains and trams and traffic jams around the arena. However, in order to ensure that the concert is as enjoyable as possible, the organisers have put together a few helpful tips.

The general rule is: allow enough time for your journey to and from the venue. It is best to use public transportation. Do not take large bags, backpacks, cameras, umbrellas, glass bottles or food with you and check in advance which entrance at the stadium leads to your seats.

You can get to the Commerzbank Arena with the S-Bahn (S7, S8, S9) - however, there are only a few additional trains due to the tunnel closure in the Frankfurt city centre. Therefore, there will definitely be waiting times. Alternatively, you can also use tram line 21. Bus line 61 (between the airport and Südbahnhof) also goes to the Commerzbank Arena.

In the immediate vicinity of the Commerzbank Arena, the parking lots GLEISDREIECK, WALDPARKPLATZ and ISENBURGER SCHNEISE are available. The car parks are signposted accordingly via the traffic routing. However, parking spaces are quickly in short supply at large events such as this. You should take this into account as well as longer walking distances from the parking lots to the stadium grounds. The parking fee per car is 6,00 EUR

Access to the stadium area is via the designated entrances E1 - E5. If you have purchased VIP Gold/Platinum tickets, you will need to use Entrance E1.

To avoid chaos inside the stadium, the entrances to the seats are divided as follows (and signposted on site):

As there will be heavy security checks, you should also allow time at the entrance. In order not to hold up the whole thing unnecessarily, you should leave backpacks, handbags larger than A4 as well as larger objects of all kinds (e.g. also umbrellas) at home or in the car! Notebooks, tablets, professional cameras or other devices for audio and video recordings are also prohibited. Food, glass bottles and cans are also not allowed on the premises.

Further information, a map of the stadium area and the arena with the individual entrances can be found HERE

You can look forward to the following songs (subject to change):

Don't read any further if you want to be surprised.

This setlist was played at previous stadium concerts

Fireworks / In the middle of paradise / One hundred percent

From Here To Infinity

Damn I Love You

Rhythm Is A Dancer / What Is Love? / I Like To Move It

We Break the Silence

I wanna feel that fever again and again

Hell in the morning

With no one else