"help help" invited to the Römer: Christmas goose dinner for the homeless
from FFM Aktuell 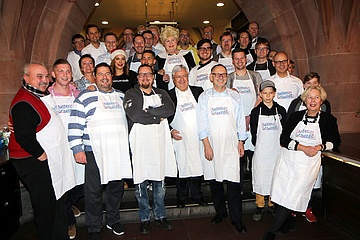 They didn't have to ask for long: 28 celebrities from Frankfurt and Rhine-Main followed the call of media manager Bernd Reisig yesterday, December 7, to entertain the homeless with a Christmas goose dinner in the Ratskeller of Frankfurt's Römer. From Lord Mayor and patron Peter Feldmann to actress Radost Bokel and TV chef Mirko Reeh to the director of Hessischer Rundfunk, Manfred Krupp, Eintracht sports director Fredi Bobic and former Lord Mayor Petra Roth: they had their hands full, because around 600 homeless people took advantage of the offer of a cosy and plentiful goose dinner. With this project of his label "helfen helfen" Bernd Reisig celebrates a small jubilee this year: Already for the fifth time he organized the event, with which he wants to give a little joy to people standing at the edge of the society and offer them a change from the often laborious everyday life. "Once again this year, Bernd Reisig is setting an example for tolerance, respect and public spirit - values that should be more self-evident than ever in a cosmopolitan city like Frankfurt, but at the same time need to be exemplified and internalized more and more urgently," noted Mayor Peter Feldmann.

As in previous years, the response to Reisig's invitation was great among the homeless. Christmas goose, red cabbage and dumplings had to be served by the celebrities in two shifts to cope with the rush. City councillor Rosemarie Heilig: "This initiative by Bernd Reisig is unconditionally worth supporting. I have great respect for him for taking on this project every year. It has its heart in the right place." For TV chef Mirko Reeh, supporting the project is also a matter of course: "As a chef in particular, I know how good a warm, nutritious meal can do you. I am therefore pleased that I now have the opportunity to serve one to these needy people."

Actress Radost Bokel was also happy to volunteer for waiter duty. "You can't imagine the conditions these people often have to live in - I'm happy to help give them a few good hours."

As is the case every year, the homeless were also presented with a Christmas gift: the Bundesliga Foundation donated a gift bag with Christmas stollen, a hat and socks, and a fleece blanket. "It is sometimes so easy to bring joy to people and it is always nice to see that our offer is so well received. Unfortunately, we forget far too often that a warm blanket and a hot meal are just not a matter of course for many people in our city," said Bernd Reisig.

For Maria and Hans-Jörg, this is the first time. "An acquaintance told us about the goose dinner and we are glad we went. It was the right thing to do and we felt welcome."

The food was donated by the Scheck-In-Center Frankfurt and prepared by the Grandhotel Hessischer Hof. The Frankfurt am Main Transport Company (VGF) made it possible again this year for all homeless people to travel free of charge by public transport within Frankfurt.

Numerous sponsors and supporters made the Christmas Goose Dinner possible: