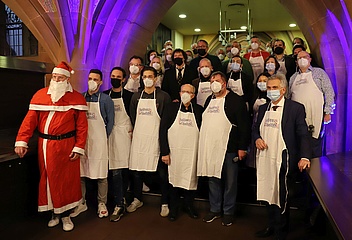 It has become a nice tradition during the Christmas season: the Christmas goose dinner for the homeless in Frankfurt's Römer, organized by the Bernd Reisig Foundation "helfen helfen". On Wednesday, 08.12., it was for the meanwhile ninth time again so far. Frankfurt celebrities served under 2G conditions about 750 goose legs, about 1,600 dumplings, up to 200 kilograms of red cabbage and about 100 liters of gravy. This was enough to feed about 500 homeless people. "The consistently large turnout shows us how important it is to organize this meal anew every year," Bernd Reisig notes. "Of course, the food itself is the central component. But it's also about showing respect to poor and homeless people and making them visible as a part of our society." Lord Mayor Peter Feldmann had once again taken over the patronage for the event; the food was donated by Rewe-Markt Bernd Kaffenberger from Bad Vilbel, and the food was prepared by Christian Dressler and his team from the Lohrberg-Schänke.

Fast 30 prominent "waitresses" and "waiters" served the food. The prominent ones came thereby not only from Frankfurt: Beside television cook Stefan Marquart, hr3 moderator Tobi Kämmerer or Kabarettist and city councillor Thomas Bäppler wolf served also PRINZEN singer Tobias Künzel or football manager legend Reiner Calmund, the Hessian government speaker Michael Bußer or the Frankfurt police chief Gerhard Bereswill delicious Weihnachtsgans: For all of them and numerous further prominent ones it was a matter of course to support Bernd Reisig with its assistance offer. For Christian Dressler, too, there was no question that he and his team would be in the kitchen for the homeless again this year. "Helfen helfen does important and outstanding work that we are always happy to support," said the boss of the Lohrberg-Schänke. "In this way, we can at least play a small part in ensuring that even the poorest in our society get some Christmas cheer."

Lord Mayor Peter Feldmann praised the commitment of Bernd Reisig and everyone involved. "In a big city like Frankfurt, there is unfortunately also a lot of poverty, everyone must be aware of this. Anyone who can help should do so - and that is exactly what Bernd Reisig is doing with his foundation, and that is exactly what all the supporters are doing."

To enable as many homeless people as possible to take part in the Christmas goose dinner, Bernd Reisig, with the support of Frankfurt's head of health Stefan Majer and the staff of the health department, had organized two vaccination appointments in advance, each combined with further meal invitations. Around 150 people took up the offer. "However, we definitely did not want to exclude those who were neither vaccinated nor recovered. Therefore, we also served our meal outdoors, in the Römerhöfchen in front of the Ratskeller. And additionally created a "toGo" - offer."

All participants were able to travel to the Römer free of charge by public transport. This was made possible by the Frankfurt am Main transport company. Following the meal, they received a gift from the German Football Association as well as the Rhein-Main Verkehrsverbund (RMV). "I am determined to offer the Christmas Goose Dinner again next year," sums up Bernd Reisig. "Of course, we are only providing a very small amount of help with this - but one that sets an example. Ideally, companies or other institutions will take our meal as an incentive to also do something for more warmth in our society."

These celebrity helpers served the meal to the homeless (in alphabetical order):