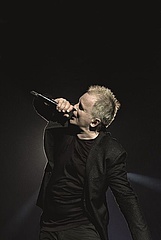 Fans of Herbert Grönemeyer should mark 9 September 2019 thick in the calendar. Because that's when one of Germany's most successful and popular artists returns to Frankfurt's Commerzbank Arena, which he inaugurated as a concert arena eleven years ago in two unforgettable shows in front of 80,000 fans. Grönemeyer's popularity has not changed in all this time: With over 18 million records sold, he is one of the most successful and popular artists in the country: the hit album "Mensch" is still the best-selling album in Germany with 21 gold records. And for over 30 years, every one of his studio albums has reached number 1 in the German charts. After the overwhelming success of his "Dauernd Jetzt" tour in 2016, it was a bit quieter around the musician - but in March 2018, the long wait of the hungry fans could be put to an end with the announcement for a new album including a concert tour in 2019. How loyal the fans are to their "Gröni" is shown alone by the fact that the arena tour, originally planned for 13 concerts, has already been extended several times and numerous dates could already report a "sold out".

Good reasons, therefore, to return to the big stadiums of the Republic! After the concerts in Berlin and Gelsenkirchen, which have already been announced for September, further dates in Germany, Austria and the Netherlands will now be added - including precisely on 09 September 2019 in the Commerzbank Arena Frankfurt!

It will be the fourth concert evening for Grönemeyer in the excellent location. Because four years after the double premiere in 2007, he returned to the Commerzbank Arena Frankfurt on 11 June 2011 as part of his "Schiffsverkehr" tour and impressed the 40.000 visitors with a nearly three-hour and 28-song show.