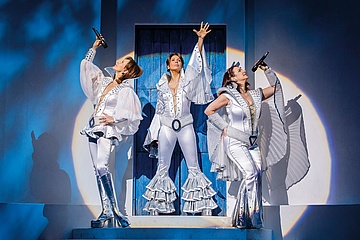 With over 380 million records sold, the Swedish band ABBA is one of the most successful bands in music history. After the band broke up, the two male members of the band, Benny Anderson and Björn Ulvaeus, were able to celebrate respectable successes with the musical "Chess". So the idea was obvious to conjure up a musical out of the old ABBA hits as well. Anderson and Ulvaeus were not very keen on this idea at first, until Catherine Johnson presented her concept for the musical: not the story of the band should be brought to the stage, but an amusing mother-daughter story, wrapped in hits like "The winner takes it all", "I have a dream" and "Thank you for the Music". The two composers were thrilled and "Mamma Mia!" was born.

Since its premiere in 1999, 25 years after ABBA won the Eurovision Song Contest, over 60 million people worldwide have seen the musical, 7 million of them in Germany alone. The cinema version was a worldwide blockbuster, so much so that a sequel will even hit cinemas in 2018. And now comes the good news: this winter, the hit musical will be making a guest appearance in Frankfurt for a short time. With 22 hits of the band, the audience will be taken to the Aegean, where the story of a daughter and her three possible fathers is told.

From 19 December 2018 to 12 January 2019, the Frankfurt audience can look forward to the original German-language production in the translation of Michael Kunze and Ruth Deny, which can be experienced for the first time in the Alte Oper Frankfurt. There good mood is guaranteed even in the gloomy winter. Advance booking is underway, Tickets are now available HERE!