Hesse now has its own Monopoly edition
from FFM Aktuell 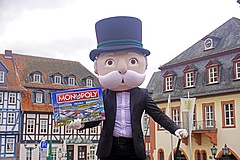 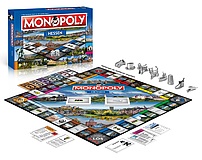 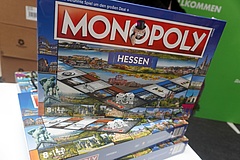 First Frankfurt - now all of Hesse: After a very successful Frankfurt version of Monopoly (which you can still buy in our shop HERE) hit the market a few years ago, a new edition of the classic game was unveiled at the Skyline Plaza shopping center on Tuesday: An edition that is all about our beautiful state of Hesse. The interest in this Hesse Edition was already huge in the run-up: "Even as we were creating the game, we sensed a huge interest among the people of Hesse. In response to our call, around 16,000 residents named more than 360 places that absolutely had to be on the playing field. More than 120,000 people then took part in the final selection. We have never had such a great response to any edition before," says Florian Freitag, managing partner of the polar|1 agency. The company has been very successfully launching themed editions of the world's most famous board game for several years.

What can you expect from this special Hesse version of the famous board game?

In addition to the street tiles that are cities in the Hesse edition of the classic board game, many small details such as the event and community cards or individual special fields (for example, a speed camera field) have been adapted to the state. 22 cities and towns can be found on the 22 street squares of the Monopoly Edition. In the Monopoly Edition Hesse you can buy no streets, but entire Hessian cities. Whether modern and cosmopolitan or traditional and historic: There is something for everyone. Building a few hotels in the skyline of the metropolis Frankfurt am Main should be a worthwhile goal for every player. Art lovers, on the other hand, will probably find a cottage in the documenta city of Kassel more attractive. Or how about a house in the university town of Wetzlar, with its medieval buildings and historic alleyways? In addition, the purchase of the Fortuna mine in Solms could prove to be a goldmine, after all, the popular visitor mine in the iron ore offers great rides in the pit cage and with the mine train.

Discovering Hesse through play - this is not only fun, but also offers plenty of background information on the individual cities, towns and sights, which can be found in an accompanying booklet that comes with the game. That it was a good decision to launch a Hesse Edition is already evident from the numbers of pre-orders: Already about 6000 Monopoly fans have ordered the game. Under the specially established website www.hessen-spiele.de the game can be purchased around the clock. In addition, Hessen Monopoly will soon be available in many toy stores, bookstores, supermarkets, tourist information offices and other shops throughout Hessen for 49.95 euros.

You can find all further info at: www.hessen-spiele.de