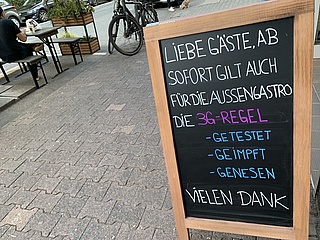 Due to the rising numbers of infections and the resulting growing burden on intensive care units, the Hessian Corona Cabinet has decided on further measures in the fight against the Corona pandemic, which were presented by Minister President Volker Bouffier and Health Minister Kai Klose in Wiesbaden. The aim of the new tightenings is to protect the particularly vulnerable groups.

The resolutions became necessary because more than 9,000 people have been newly infected with Corona in Hesse within the past 7 days. The situation in the hospitals is also serious. Currently, 649 COVID-19 patients are being treated as in-patients in Hessian hospitals. 205 of them are so seriously ill that they require intensive medical care. The vast majority, 70 percent of them, are unvaccinated.

"The numbers make three things clear. First, vaccination is the best protection against severe corona disease. Secondly, in addition to the nursing staff, it is mainly thanks to those who have been vaccinated that the situation in our hospitals has so far been manageable despite the steep rise in the number of infections. And thirdly, the vaccination rate is still not high enough. We also need more speed in booster vaccinations."

Hesse is responding in accordance with warning level 1 of the Hessian Corona Protection Ordinance with targeted measures to contain the pandemic. "The numbers of the most seriously ill show: We are primarily dealing with a pandemic of the unvaccinated. The new measures are necessary so that we can continue to maintain our health services and further limit the risk of infection through increased testing. It is and remains our goal that as many people as possible get vaccinated," said Bouffier and Klose. The new measures will come into force on November 11.

The most important measures at a glance:

Tightening the testing requirement for 3G on PCR

Those who are not vaccinated or recovered will be required to present an up-to-date PCR test to attend 3G events or enter many 3G facilities in the future. A rapid antigen test is no longer sufficient for this purpose. Specifically, this affects indoor areas at events, trade fairs and in cultural operations, recreational facilities, sports facilities, cultural venues, restaurants, casinos and gambling halls, as well as prostitution establishments.

For staff, as before, an employer test twice a week is sufficient. Only for children and adolescents and persons who cannot be vaccinated for medical reasons (medical certificate required), an antigen test certificate is still sufficient.

3G rule in the workplace for employees with customer contact

The state government had already tightened mandatory testing in nursing homes and hospitals last week. Now, testing requirements are being extended in other areas as well. In future, the 3G rule will also apply in the workplace whenever employees have contact with external customers. This applies, for example, to staff in supermarkets, in local public transport or at the hairdresser. Hesse is thus building on a federal regulation that prescribes corresponding testing opportunities twice a week at the workplace. In Hesse, these tests must be used by employees in view of the current infection situation also mandatory.

For events with more than 5.000 participants, a maximum of 10 percent may be tested in the future. The remaining participants must be either vaccinated or recovered.

All unvaccinated students must be tested for attendance by 31.1,2022 to provide negative proof of testing three times a week instead of twice a week - as has been the case in the prevention weeks following the holidays. The tests can still be provided at school free of charge and will be recorded in the test booklet.

The state government is also launching an information drive for booster vaccinations. "We know by now that vaccination protection slowly wears off after six months. That is why we are advertising even more specifically for booster vaccinations and are now, for example, writing again personally to all Hessians over 70 years of age for whom the Stiko expressly recommends the booster," said Bouffier and Klose.

"We will not only advertise for the booster, but also actively approach people who are particularly at risk. Accordingly, we have agreed with the municipal umbrella organisations that the mobile vaccination teams will make targeted visits to old people's and nursing homes and vaccinate the residents there again. In quite a few districts and independent cities, this has already started," said Bouffier and Klose.

Minister President Bouffier has again called for a Minister President's Conference, which should take place soon. "The current situation calls for an agreement between the heads of government of the federal states and the federal government. In my view, this is imperative. Certain measures must be coordinated nationwide. This includes, for example, discussion of the possible reintroduction of free Corona tests or compensation payments for hospitals that care for Covid patients."

Klose also drew attention to the flu vaccination: "Influenza vaccination is an important protective measure for people who are particularly at risk. Studies also show that vaccination against influenza can also protect against dangerous side effects of COVID disease such as thrombosis, strokes or blood poisoning."