Hesse to collect, swap and stick
from FFM Aktuell 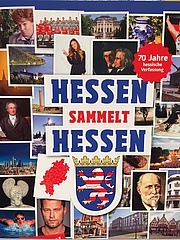 For the 70th. State birthday of Hesse, the team of Juststickit together with the Hessian State Chancellery has released a very special Panini album: 314 collectible pictures around Hesse, which are stuck into a lovingly designed album. Whether the wonderful landscape of our beautiful state, important buildings, personalities from the past and present and much more were put together. The album itself offers some informative accompanying texts.

Whether Goethe or the Brothers Grimm, whether Badesalz or Heinz Schenk, whether the Frankfurt skyline or the Lorsch Monastery - everything that you associate with Hesse, also finds its place in this beautiful scrapbook, which was created under the patronage of Prime Minister Volker Bouffier. Stickers from all the counties and independent cities can be found in the collection bags, as well as stickers that football fans will love. And this does not only mean the fans of the Frankfurt Eintracht.

"Hesse collects Hesse" is a nice birthday present to our state and a successful chronicle of the history of this region. Here you will quickly rekindle the passion for collecting that has been associated with Panini stickers for decades!

For more info on the album, visit: