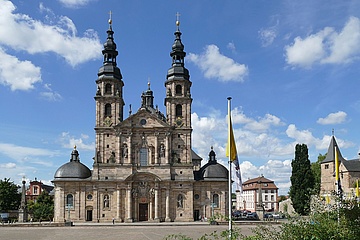 After the Hessentag 2020 in Bad Vilbel already had to be cancelled due to the Corona pandemic, the city of Fulda and the state of Hesse have now pulled the ripcord for 2021 as well and cancelled the Hessentag planned for 21. We are aware of the great longing of the people for the Hessentag in Fulda. However, we are also aware of our responsibility for the safety and health of visitors and employees. They have top priority. Our hopes for a feasible Hessentag have not been fulfilled due to the pandemic situation which is difficult to calculate. What remains is a city that is even more attractive thanks to the successfully implemented urban development projects and the great opportunity for a high-quality Hessentag 2026 in Fulda," announced Fulda's Lord Mayor Dr. Heiko Wingenfeld and the head of the Hessian State Chancellery, State Minister Axel Wintermeyer. The city's Hessentag advisory board had previously spoken out in favor of a cancellation.

"We hurt the cancellation extraordinarily"

."We hurt the cancellation also extraordinarily because many institutions, churches, associations, the employees of the city and not least many volunteers as partners and fellow campaigners of the Fulda Hessentag have shown great commitment and actively supported the planning. We thank them very much for this", said Wintermeyer and Wingenfeld. The Lord Mayor continued: "Our Hessentag team has worked out an adapted concept with heart and soul and flexibility, which would have worked well against the background of the infection in the summer of 2020 and, not least, would have brought the urgently hoped-for impulses for gastronomy, the hotel trade and retail in the city centre. In recent weeks, however, the current figures and the forecasts for the rest of the year have developed in such a way that the Hessentag in 2021 will not be feasible from our point of view."

Put protection of at-risk groups in the foreground

The state chief emphasized that it was right and important to prioritize the protection of at-risk groups now and in the future, and to keep an eye on medical and relief capacities. "With all the disappointment: in view of the currently highest incidence values in Hesse in the district of Fulda and the special challenge posed by the mutated variant of the virus, a decision other than the cancellation of the city is currently not conveyable. The protection of health is the top priority of the Hessian state government. Economic damages we can replace, human lives not."

Wingenfeld highlighted the positive impact of the Hessentag on the city of Fulda. "Thanks to the subsidies from the state of Hesse of up to 6.5 million euros, we will be able to implement a number of important projects for urban development. These include the cycle bridge and cycle paths in the Fulda floodplain, the expansion of the Tourist Information Centre, the renovation of the path system in the castle gardens as well as the stadium and the development of the Kulturhof. Citizens will benefit from these and other projects in the long term." He added that the cancellation of the Hessentag was certainly a heavy blow for the business owners, restaurateurs and hoteliers in the city centre. "It remains a special concern for the city of Fulda to support them to the best of its ability and to develop creative ideas for the period after the pandemic has eased to revitalize the city center and strengthen the sense of community."

On behalf of the state government, Minister of State Wintermeyer promised the city to participate in the event of a possible deficit in the unavoidable costs of the city associated with the cancellation. The state will provide up to two million euros for this purpose. In addition, the next possible Hessentag date in 2026 will be reserved for Fulda. "We are not leaving the city of Fulda out in the cold and are supporting it in this difficult situation. The people, the many great partners and of course we ourselves will sorely miss the 60th Hessentag in Fulda - but we hope to be able to celebrate it in Fulda in 2026," Wintermeyer explained.