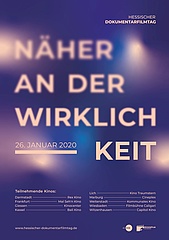 On Sunday, January 26th, a special premiere will be celebrated in numerous Hessian cinemas: On the occasion of the anniversary year of AG DOK the 1st Hessian Documentary Film Day takes place. The event is also the kick-off for a series of nationwide events to mark the 40th anniversary of the AG DOK.

The HESSISCHE DOKUMENTARFILMTAG is to be held annually in cooperation with Hessian cinemas from 2020. The audience throughout Hesse will be shown documentary films under a special motto. In the first year this is called "Closer to reality". In a time of loss of credibility in the media and in politics, the importance of the documentary film, which lives from its proximity to its protagonists and themes, should be emphasized. In discussions with filmmakers and the audience, the 1st Hessian Documentary Film Day aims to approach important contemporary issues and question the relationship between documentary film and reality.

In the first year, the organizers will focus on a selected selection of cinemas. In the future, the number of participating cinemas is to be increased and more cinemas in rural areas are to be won over to the project. By showing films at cinemas in Hessen, the HESSISCHE DOKUMENTARFILMTAG contributes to the promotion of the cinema as a cultural location in the whole of Hessen.

The AG DOK - Arbeitsgemeinschaft Dokumentarfilm is the largest independent film association in Germany with over 900 members. The AG DOK is represented in numerous committees (e.g. FFA, VG Wort, VG Bild-Kunst) and is committed to strengthening documentary film in cinema and television. In addition to the AG DOK Bundesverband based in Frankfurt, there are regional groups. Hessian DOCUMENTARY FILM DAY

***cinema event: For the first time on screen***

***Preview before the official cinema release***

***Preview before the official cinema release***