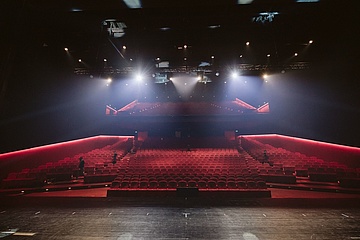 For months now, there have been no live concerts - apart from a few drive-in concerts and open-air events. The fact is that many freelance artists have been deprived of their livelihood due to the lack of performance opportunities. There is still hope that the situation will improve in the course of the year - but there is no real perspective for the artists at the moment. This is exactly where Hessischer Rundfunk (hr) wants to start with "Bühne frei!"

With this new campaign, the broadcaster wants to support musicians* from all over Hesse and get them on stage for a concert. That, which was not possible for so long, is to give then again: Real live concerts! To finally be able to stand on stage again, ensembles, bands and solo artists of all musical genres can apply now at hr.de/buehnefrei. This will result in several evenings of concerts, each with a celebrity host inviting four acts.

The reason for this promotion is, of course, the fact that the cultural industry has been hit harder than almost any other by the pandemic and its accompanying restrictions. "And because public performances with an audience continue to be cancelled, we want to use the 'Bühne frei!" campaign to enable the Hessian music scene to present itself to a wide audience and draw attention to itself," says hr programme director Gabriele Holzner, describing the plan. "Already in December, we hosted the successful 'hr Comedy Marathon', supporting artists* from a different genre, and the hr Big Band also invited numerous jazz musicians* from Hessen as guests for its 'Act Local' concert series."

Professionals from all musical styles wanted

.Seeking professional bands, ensembles and solo artists* from all musical styles from rock to classical who have been hit hard by the pandemic-related event cancellations. "Knowing full well that we can't keep individuals or the whole industry afloat, we want to support them in this difficult phase and give them a little ray of hope now," say the organizers.

As part of this campaign, hr will show the effects of the Corona pandemic on the local music scene in background reports, portraits and interviews. The concerts, each featuring four acts and a celebrity host, will be shown on hr television, in the ARD media library and on YouTube from May onwards. Selected performances will be broadcast by hr1-Live Lounge and hr2-kultur.