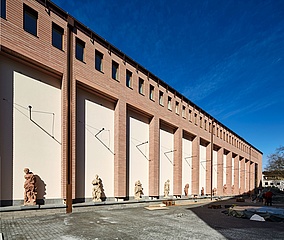 (kus) The new building for the Frankfurt Historical Museum will be handed over to its user in May. Just in time for this milestone of the large project, the facades of the large exhibition building have been equipped with sculptures. After groups of spolia, including inscription stones, keystones and corbels, have been attracting the attention of passers-by in the twelve niches of the north façade facing Römerberg since November 2016, the twelve squares on the south façade have now also been equipped. Presented here are figurative sculptures from the 17th to 19th centuries from Frankfurt gardens.

The sculptures on the south façade are arranged according to their origin from different gardens. In the west, the row begins with four female embodiments of the fine arts that migrated from their green refuge in Rödelheim to the Zeil, from there to Forsthausstraße, and finally to a garden in the Wallanlagen before coming to the Historisches Museum in 1955.

The muscular figure of Hercules placed in the middle of the gallery once marked the beginning of an avenue in the garden of Johannes Schwind (1580-1648), the Frankfurt city sheriff, as shown in a coloured engraving by Mathias Merian the Elder of 164 Friedberger Strasse. It has been damaged, the head is lost.

The figure of the goddess Flora contributed to the Arcadian atmosphere in the garden of the wine merchant Konrad Valentin Reineck (1657-1721). It has been in municipal ownership since 1822 and came to the Historical Museum in 1878, when the Stadtpalais was demolished.

With representations of ancient deities such as Minerva, Juno, Diana, and Pluto, the writer and Prussian councillor Johann Michael von Lo&euml;n (1694-1776) and the builder and Prussian building councillor Philipp Holzmann (1836-1904) gave their gardens a special atmosphere. Like the group of four allegories, they were made by the sculptor Cornelius Andreas Donett (1682-1748).

Not only through loans, but also through acquisitions, the sculptures have entered the collections of the History Museum. They were selected with curatorial care as part of the museum's new conception, in order to introduce visitors and passers-by to Frankfurt's history and the special character of the old city already in the new urban space opened up by the Museum Square.

The "spolia" in the twelve niches of the north façade are fragments and remains of house façades from Frankfurt's old and new towns. The 50 stones were grouped according to function. Only a part of the objects entered the museum collection after the destruction of the Second World War; a large part had already entered the museum collection around 1900, when modern streets through the closely built-up old town were planned and many houses were demolished.

Arms stones and grave inscriptions were also purchased in memory of important Frankfurt families. For example, in niche 4 on the north façade is the gravestone of Domenico Marino Brentano (1686-1755). After a successful lawsuit against the council of the city of Frankfurt, he was the first Catholic to acquire Frankfurt citizenship in 1740. His son Pietro Antonio (1735-1795) was the first Brentano to become a permanent resident of Frankfurt.

Prior to their installation, Michael Hangleiter's team of restorers cleaned the delicate sandstone and limestone in the workshops. The restorers also supervised the positioning of the sculptures on the basalt benches on Museum Square and, in the case of the spolia, the complicated installation in the niches. As soon as the MuseumsQuartier is handed over in May, the construction fences will disappear and the new square will also be open to the public. Then the new sculpture and spolia galleries will be able to unfold their full effect. This will also mark the opening of the first exhibition in the new MuseumsQuartier.

Bankhaus B. Metzler seel. Sohn & Co. has generously supported the costly restoration of the sculptures and spolia. Further funding has been granted by the Hessian Museum Association