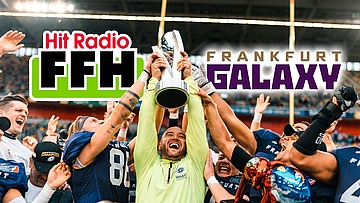 American football has a particularly loyal and large following in Frankfurt - not least because of the 'Champ of European Football'! We're talking about Frankfurt GALAXY, of course, which is now bringing football back to the Main metropolis with new media support in tow! Hessen's radio market leader HIT RADIO FFH and Frankfurt GALAXY, the football champion of 2021, are going their separate ways again with immediate effect. Already in NFL Europe times, both were a strong team. Now a new chapter in the successful cooperation is opened.

From June 2022, the American football atmosphere returns to the Frankfurt PSD Bank Arena. Then Frankfurt GALAXY will tackle the mission of defending its title. As "Sports Team of the Year 2021", the 60-strong football team wants to offer its fans exciting and action-packed football once again. And to create the perfect atmosphere, the GALAXY home games will be accompanied by an appropriate supporting program in cooperation with HIT RADIO FFH: Three hours before kickoff, the free Power Party with DJs, cool music, barbecue and food trucks will begin on the forecourt of the PSD Bank Arena. Best entertainment for the whole family! Tickets are available now from FFH on the web and in the app. On 05 June it goes to the season opener directly with a gripping classic - the duel against Düsseldorf 'Rhein Fire'.

Marco Maier, Managing Director Radio/Tele FFH is delighted about the renewed cooperation: "American football is currently more popular than ever - with millions of fans worldwide and an NFL game in Frankfurt next year in Deutsche Bank Park. HIT RADIO FFH is involved in various sports as a partner of major sports clubs in Hesse - football rounds off our sports portfolio and with the Frankfurt Galaxy we are gaining a very strong partner in the region."

Jörg Ziesche, Managing Director Frankfurt GALAXY added: "I am very much looking forward to working with HIT RADIO FFH. To have such a strong partner at our side is a huge gain for us. Already in NFL Europe times this cooperation was very successful. I am pleased to tie to it."

More about Frankfurt GALAXY can be found at: https://frankfurt-galaxy.eu/