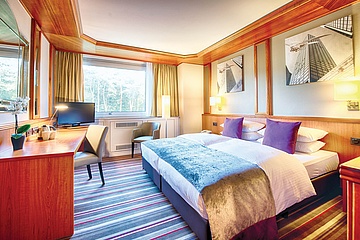 No April Fool's Joke: Starting April 01, the Holiday Inn Frankfurt Airport-North will operate as the Leonardo Hotel Frankfurt City South after extensive renovations. Around 1.4 million euros were invested in the redesign. Not only the 150 rooms, but also the meeting rooms, lobby, bar, restaurant and building services were completely renovated. Yoram Biton, Managing Director Leonardo Hotels Central Europe, is highly satisfied with the result: "The hotel now has the comfort and the unmistakable flair that our guests appreciate in Leonardo Hotels." The new Frankfurt property brings the number of Leonardo Hotels in Germany to 47. "We are continuously expanding our network of locations, thus further increasing brand awareness," Biton emphasizes.

The Fattal Hotel Group, which took over the hotel in 2013, is a leading hotel operator in Israel and was founded by David Fattal in 1998. Since then, the company has been synonymous with innovation and dynamic growth in the hotel industry. The entire group operates more than 170 hotels in over 90 destinations with 33,000 rooms in Europe and Israel.

Leonardo Hotels is the European division of Israel's Fattal Hotel Group and one of the leading as well as fastest-growing hotel chains in Europe. Active in the European market since 2006, the company now has more than 130 hotels in over 75 destinations. The European headquarters is in Berlin. Leonardo Hotels offer rooms to feel good in. A regional character, local reference as well as their own design identity with individual ambience distinguish the hotels, which have categories ranging from three stars to four stars superior (or equivalent level).

According to the company's credo "feeling good", the company and its teams strive for the 100 percent satisfaction of every guest. 5,500 employees contribute to the success of Leonardo Hotels. The umbrella brand Leonardo Hotels is complemented by the brands "Leonardo Hotels", "Leonardo Royal Hotels", "Leonardo Boutique Hotels" and "NYX Hotels". The group has hotels in Germany, Austria, Switzerland, Belgium, the Netherlands, England, Scotland, Wales, Northern Ireland, Ireland, Spain, Hungary, Poland, the Czech Republic and Italy. Together, the hotels have 25,000 rooms and more than 700 meeting rooms.