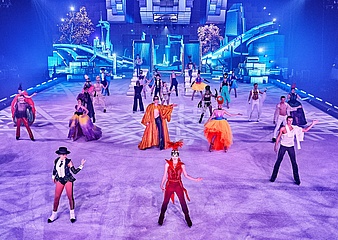 That's quite a success story: started in 1943 in Ohio as a small hotel show, it has grown over the past 77 years to become the most successful ice show of all time. To date, over 100 productions have thrilled well over 330 million viewers worldwide, earning HOLIDAY ON ICE a well-deserved entry in the Guinness Book of Records. More than 6,000 professional figure skaters, including 14 Olympic medal winners, stood on the ice for the various shows and slipped into almost 30,000 costumes specially made for the productions. An impressive success, which was celebrated last year with a big anniversary show.

Whoever thinks that now in the year after the anniversary smaller buns will be baked, is gravely mistaken. This became clear in a spectacular way at yesterday's Frankfurt premiere of the new SUPERNOVA program. The figure skaters, including the 14-year-old up-and-coming talent Leonie Schwenzner, caused great enthusiasm among the audience in the sold-out Festhalle with their performances, which was acknowledged at the end with thunderous applause and standing ovations. These performances are embedded in a show that can once again convince with magnificent costumes, an enchanting stage design and rousing music.

Robin Cousins, Creative Director of the production, describes SUPERNOVA as "a tribute to the icy polar world as well as the universe and all its stars, which we celebrate with exhilarating sets, cutting-edge technology and breathtaking choreography. We really make it snow in the show and take our audience to a distant galaxy". And that works for old and young, as proven by the many shining eyes and smiling faces during the show.

The story is told of a pair of lovers who, in the midst of a wintry celebration, are carried out into the infinity of the cosmos by a gigantic snowstorm. There begins for the two a fantastic adventure beyond space and time. It leads the lovers to truly overwhelming places in the galaxy and to its exotic inhabitants. Finally, a galactic explosion, the titular supernova, brings them back to Earth and back to the festival in the snowy ice world. There they celebrate their love against a breathtaking backdrop in an unforgettable finale surrounded by colorful auroras. A goosebump moment par excellence.

You quickly forget that you are actually sitting in the festival hall when SUPERNOVA takes their visitors into two completely different worlds. A 3D LED wall of individually playable cubes, a moving platform for special acts, rapid speeds throughout the arena as well as flying elements and skaters are also used. Thus, state-of-the-art technology, fantastic show values and first-class figure skating combine to create a truly great entertainment show. "SUPERNOVA represents our highest standards for state-of-the-art live entertainment on ice. With this new production, HOLIDAY ON ICE stays true to its own requirement to continually reinvent show experiences, break boundaries and challenge itself every year," said Producer and CEO Peter O'Keeffe.

Tickets and more info on the show: www.holidayonice.de

Showtimes for SUPERNOVA in Frankfurt - Festhalle