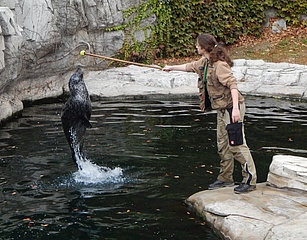 Once again, Frankfurt Zoo has put together a great holiday program for children this summer vacation. From now on, every Tuesday and Thursday, staff from the Education Department will be taking children on very special adventure tours of Frankfurt Zoo, introducing them to the secrets and fascinating facts from the animal kingdom. Each week these tours have a different theme.

On Tuesday, 4 July and Thursday, 6 July, the zoo is all about predators. They are dangerous and mysterious: lions and tigers, maned wolves, meerkats and mongooses. Although they differ in size, they all have one thing in common: their life as hunters. Do all predators really eat meat? And why do their eyes glow in the dark? Their abilities for this way of eating are explained in a playful way.

On Tuesday, July 11, and Thursday, July 13, gorilla, orangutan <x>ampersand</x> co are on the program. They live in large groups or in small families. Often the males look different from the females and the young have fool's liberty. Not all apes are the same, not all gorillas are the same. Especially with the great apes, each individual animal is a unique personality, similar to us humans. Together we observe our closest relatives and explore their behaviour. We will also get to the bottom of what cell phones and biodiesel have to do with the threat to the great apes.

Young zoo visitors can look forward to harmless encounters with venomous animals on Tuesday, July 18, and Thursday, July 20: snakes, spiders and scorpions are often maligned and misunderstood. Those who have seen these fascinating animals up close and learn that they usually use their venom not as a weapon of attack but as a weapon of defense will surely rethink their attitudes toward these creatures.

Seals, seals and fur seals will captivate audiences on Tuesday, July 25, and Thursday, July 27,. They are skilled hunters underwater and always eat the head first from the fish. Through intense observation, their secrets can be uncovered. Visitors will also learn about an increasing danger to them and other marine life: Plastic particles and other pollutants are entering the oceans in large quantities, making animals and ultimately humans sick. What can each individual do about it?

On Tuesday, August 1, and Thursday August 3, nocturnal animals will turn night into day. Not all animals are active during the day. Many species, such as bats, aardvarks and pinnipeds, can only be seen at night. They are perfectly adapted to life in the dark. On a tour of the Night Animal House, participants will learn about the benefits of turning night into day for these animals.

The rainforest is a habitat for many animals. It and its inhabitants will be the subject of Tuesday, August 8, and Thursday, August 10. Before you see animals in the rainforest, you usually hear them first. Why the tropical rainforest can provide a habitat for the largest number of species of all climates can also be vividly understood at many enclosures in the zoo - and without a vaccination certificate and pith helmet!

For the tours, in addition to the regular zoo admission of five euros, an additional participation fee of four euros is charged. Registration is required and is possible by calling 069/212-36952 or 069/212-36986.

More info can also be found at: www.zoo-frankfurt.de