How we act together
from FFM Aktuell 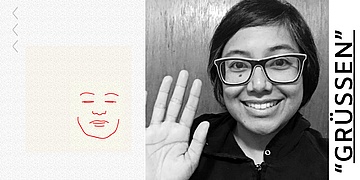 On <link http: www.schirn.de hwat _blank>www.schirn.de/HWAT and in the SCHIRN foyer through Jan. 22, 2017

For the Schirn Kunsthalle Frankfurt, U.S. artists and programmers Lauren McCarthy and Kyle McDonald have developed an interactive performance project titled How We Act Together (2016), which can be accessed online at www.schirn.de/hwat beginning today, November 29, 2016. Individual participation in the project is possible via the website from one's own PC using a webcam. In addition, visitors to the Schirn can participate in the project via an installation in the foyer.

How We Act Together is a community performance in the form of a video stream. The focus is on gestures as the most elementary units of social interaction. Participants are asked to repeat in depth, in front of their webcam, one of four specified gestures - nodding, shouting, greeting or eye contact. Once the algorithm programmed by McCarthy and McDonald recognizes the appropriate gesture, a video recording begins. This is a competition that rewards perseverance: if a user performs the gesture longer than the previous participant with the longest stamina, his or her recording is included in the video stream and becomes part of the overall performance. The result is a collective video sequence, choreographed by the computer, of the same gestural performance by different people. Within a spatially and temporally distributed group, an asynchronous interaction thus takes place.

The artists Lauren McCarthy and Kyle McDonald on their project: "With our project How We Act Together, developed for the Schirn, we want to draw attention to how even the smallest gestures influence social interactions. Interpersonal relationships have long been a topic of interest to both of us - especially in the context of digital communication, which is often characterized by divided attention as well as the loss of real social ties. Via the technical possibilities of facial recognition, we make visible the discomfort that sometimes creeps into social interactions in an ad absurdum repetition of always the same gestures."

On Thursday, December 1, 2016, at 7 pm, the Schirn invites you to a FacebookLivestream with the two artists (<link http: www.facebook.com schirn _blank>www.facebook.com/schirn). They will present their project How We Act Together to the community.

Lauren McCarthy lives in Los Angeles and Brooklyn. She devotes much of her work to current social and technological developments and structures and their effects on people. McCarthy has participated in numerous international exhibitions and festivals, including Ars Electronica (Linz), the Conflux Festival (New York), the Japan Media Arts Festival (Tokyo), as well as installations for the London Eye, the US Holocaust Memorial Museum (Washington, D.C.), and the Metropolitan Museum of Art (New York). After receiving a Master of Fine Arts from the University of California (Los Angeles) and a Bachelor in Computer Science and Art and Design from the Massachusetts Institute of Technology (Cambridge), she was a fellow at the STUDIO for Creative Inquiry at Carnegie Mellon University (Pittsburgh), at Eyebeam (New York) and at Ars Electronica / QUT TRANSMIT3. She currently teaches Design Media Arts at the University of California (Los Angeles) as an Assistant Professor. Her recent projects include Social Turkers and Follower

Kyle McDonald works with open programming code and is involved in toolkits for artists and designers such as openFrameworks, which means he develops tools that allow artists to work creatively with new algorithms. His work is strongly process-oriented; as a matter of principle, he presents his ideas and projects to the public before they are completed. McDonald is a member of F.A.T. Lab, Community Manager for openFrameworks, and Adjunct Professor at ITP, New York University. McDonald has held fellowships at Carnegie Mellon University's STUDIO for Creative Inquiry (Pittsburgh) and the Yamaguchi Center for Arts and Media (Yamaguchi City, Japan). His work has been shown at exhibitions and festivals worldwide, including Ars Electronica (Linz), Sonar/OFFF (Barcelona), Eyebeam (New York), Anyang Public Art Project (Anyang, Korea), Cinekid (Amsterdam), and the NODE Festival (Frankfurt a. M.). McDonald has devoted numerous workshops and projects to image and face recognition and social interaction.

For online performance, the Schirn communicates on the social web with the HASHTAGS #hwat #Schirn