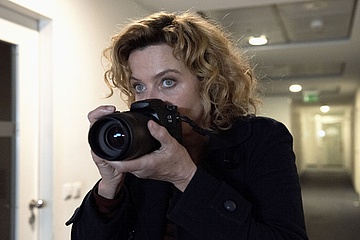 "Der Turm" is the title of the new Frankfurt Tatort, which the Hessischer Rundfunk (hr) will show on Wednesday, 26 December 2018, at 8.15 pm on Ersten. It was directed by Lars Henning, who also wrote the script.

About the content: Janneke and Brix are called to a crime scene at night. A young woman, scantily clad, a plastic bag pulled over her head, lies dead at the foot of one of Frankfurt's bank towers. While Janneke arrives early at the secured and cleared crime scene, Brix is late. The KTU is also not there yet. Janneke goes into the tower alone and gets a first impression of the crime scene, taking photos as she often does. Suddenly she hears footsteps behind her. Instinctively she reaches for her camera. A few flashes illuminate the scene, then a thud. When Brix finally arrives, he finds Janneke unconscious in the elevator. She is taken to the hospital with a traumatic brain injury. Brix sets to work alone and quickly reaches the limits of the hermetically sealed tower. When Janneke regains consciousness in the hospital, her memories are hazy. She is also heavily medicated and no longer trusts her own mind. Only her photographs give her something to hold onto in her extremely foggy memories. The perpetrator himself is not really recognizable in any of the pictures, only cutouts, blurred details, overexposed fragments. Together, Brix and Janneke try to piece together a clear picture of the crime from the contradictory scraps of memory, the photographs and witness statements. All the threads come together in the tower. The commissioners must once again gain access .

Der Turm" was filmed, among other places, in the 93-meter-high skyscraper on Grosse Gallusstrasse in Frankfurt. The building, which most recently housed the Deutsche Bank Investment Banking Center, was demolished between April and October 2018. It was built in 1969-71 to a design by architect F. Wilhelm Simon.

The team Carol Burandt von Kameke (camera), Annete Reuther (production design), Majid Sarafi (sound), Stefan Blau (editing) and Katharina Schnelting (costume design) were responsible for the realization. Carsten Staudt was in charge of production, Jörg Himstedt, Liane Jessen and Birgit Titze (ARD Degeto) were in charge of editing. The Tatort "Der Turm" premiered at the beginning of September at the Festival of German Film in Ludwigshafen