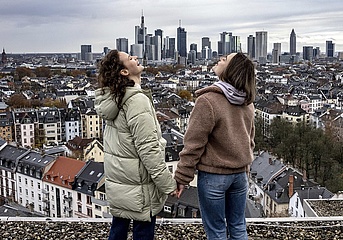 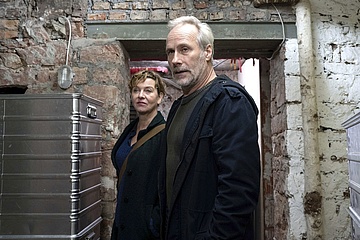 For the 14th time, Janneke and Brix will be investigating for Hessischer Rundfunk's Frankfurt TATORT on Sunday, October 31. The latest case of the popular team of investigators, entitled "Luna frisst oder stirbt", will be shown at 8:15 p.m. on Ersten. The film was directed by Katharina Bischof, who also wrote the screenplay together with Johanna Thalmann. In addition to Margarita Broich and Wolfram Koch, Jana McKinnon, Lena Urzendowsky, Tinka Fürst, Nicole Marischka, Clemens Schick, Thomas Prenn, Ludwig Simon, Isaak Dentler and Zazie de Paris can be seen in other leading roles. The film was shot in November and December 2020 in Frankfurt and the surrounding area.

Filming took place in Frankfurt on Berger Straße, among other places, in the fictional café "Kelle", which numerous passers-by mistook for a real new opening. So it was not uncommon for someone to want to stop in for a coffee while the shoot was being prepared or even in full swing. Something similar already happened a few years ago in the Oeder Weg, where the TATORT crew had set up a kiosk, where many a northerner and many a northerner wanted to buy a daily paper, a little beer or a sweet bag.

And that's what "Luna eats or dies" is about: 19-year-old up-and-coming author Luise Nathan (Jana McKinnon) is found dead shortly after the release party for her debut novel. At first, everything points to a suicide. Roland Häbler (Clemens Schick), head of the publishing house, and Marvin Gess (Thomas Prenn), editor, reproach themselves: Could Luise not withstand the high pressure of expectations? Luise's book, which is about the socially disadvantaged teenager Luna, is a sensation in their eyes. Luise's mother Friederike (Nicole Marischka), a city councilor for social affairs, on the other hand, cannot imagine that her strong daughter would commit suicide.

Frankfurt's chief detectives Anna Janneke (Margarita Broich) and Paul Brix (Wolfram Koch) soon determine that massive outside influence led to the young woman's death. Outside the publishing house, their investigations lead them to Luise's friend Nellie (Lena Urzendowsky), who is growing up in less middle-class circumstances with her mother Jessie (Tinka Fürst) and her little sister. In the process, Luise's novel increasingly comes into focus: while Brix and Janneke initially devote themselves to the victim's novel out of thoroughness, as they investigate they realize that it is grounded in the reality of the two girls and provides crucial clues ...

Once again, sounds like an exciting case for Janneke and Brix! TATORT fans shouldn't miss this!