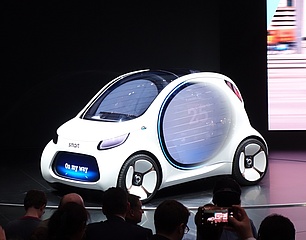 The rainy, stormy weather does nothing to dampen the fascination of the IAA. As a result, the IAA 2017 is once again part of the absolute - expensive - must-attend programme for motorists.

At the same time, even the outsider notices that this industry and our view of the automobile is undergoing a very fundamental change. In previous years, too, the topic of e-mobility and autonomous driving was intensively discussed, but this time one senses that it is not the car manufacturers themselves who are presenting their own visions to the user, but that they have incorporated the high demands of users into their developments as quickly and extensively as possible and are observing very closely how the user behaviour of consumers is changing. The user, his accustomed technical comfort environment and his need for communication and connectivity now determine the innovation approaches and cycles. A fundamental change in perspective. Consequently, Google and Facebook are also represented at the IAA. It is to be hoped that engineers, as key decision-makers at the car companies, will also take a very close look at them and take them seriously.

After all the unspeakable exhaust and manipulation scandals, the prospective buyer and customer has been educated to be a very critical buyer who questions many things and places even higher demands on the car companies. In addition to the topic of electromobility, connectivity and autonomous driving play a major role. Smart presents this impressively with its premiere of the smart vision EQ fortwo. The vehicle provides a preview of urban mobility in the future.

Increased Chinese companies are represented. They are also sending numerous observers and experts to Frankfurt. In the future, they will play a much stronger role in the field of eMobility than their earlier attempts at walking the walk ever suggested.

However, it is also noticeable that some major manufacturers are not represented and the "normal" car fan will find fewer halls interesting.

For the aesthetes, we definitely recommend the wonderfully restored classic cars, for example, at the Brabus Classic stand.

More info can also be found HERE in our event calendar