Important information about the Frankfurt Marathon
from FFM Aktuell 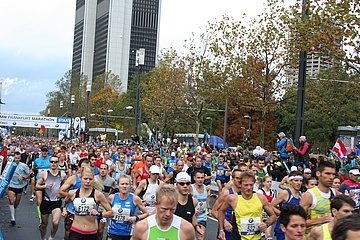 (kus) The Frankfurt Marathon begins on Sunday, October 30, at 10 a.m. with the starting gun for the first race field. This will be followed by further starts for the relay marathon at 10.25am and the 'mini marathon' at 10.55am. The start for all participants is in the Friedrich-Ebert-Anlage. The finish line is the Frankfurt Festhalle on the exhibition grounds.

Numerous closures in the city

To mark the event, numerous streets in Frankfurt's city centre, Sachsenhausen, Niederrad, Goldstein, Schwanheim, Nied, Höchst and the Gallus district will be temporarily closed to traffic between 7am and 4.30pm. Hansaallee and Eschersheimer Landstraße will already be closed at Miquelallee due to the running course. Due to the large number of traffic closures set up, there will be not inconsiderable traffic obstructions in the city centre. A detailed overview is given in the PDF document attached by the Frankfurt police. Further information is also available at

Suburban and subway trains will be running

Numerous streetcar and bus lines will have to be disrupted. S-Bahn and underground trains can run unhindered. A service telephone has been set up by the RMV. Under the telephone number 069/24248024 (daily around the clock) information is given to current closures and under

Parties along the running course

When the 15,500 athletes run towards the finish line in the Festhalle, they will be loudly supported along the route. A total of 2,000 helpers are involved in the course festivities. 20 Frankfurt clubs, nine moderators and five video screens are in action for the runners and spectators. An overview can be found at