In Frankfurt, "Click & Meet" is possible again
from FFM Aktuell 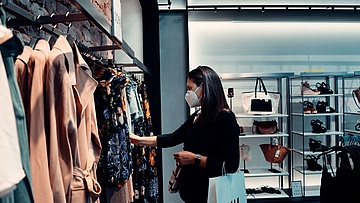 Although it is still too early to give the all-clear, the falling infection figures in Frankfurt also give hope that the third wave has been broken and that the relaxations decided by the Hessian state government can soon come into effect in the Main metropolis. Currently, the 7-day incidence in Frankfurt is still 116.5, which is still above 100, but also below 150. And this means that retailers are once again allowed to offer shopping appointments to customers with a negative Corona test ("Click & Meet"). This possibility exists since today, Friday, May 14.

As "an important signal for Frankfurt's retail trade" called Lord Mayor Peter Feldmann, Health Department Stefan Majer and Economic Department Markus Frank this development. The city leader declared hopefully: "Finally we see light at the end of the tunnel. The infection figures are falling - and slowly life is returning to the shopping streets and shops. 'Click & Meet' is a first, cautious step towards opening up retail. I am convinced: more will follow in the foreseeable future. As a city, we will give retailers a helping hand with our 'Frankfurt Plan', among other things."

"With falling incidences and progress in vaccination, we are on the right track," says Stefan Majer, the city's head of health, echoing the positive outlook. However, he also urges caution: "It remains important to consistently adhere to hygiene rules so as not to jeopardize what has been achieved once again."

Economic Affairs Director Markus Frank says: "The experience of the previous 'Click & Meet' opportunity shows that this shopping option was well received by both customers and retailers and gives hope for normality in the near future. We know that more impetus is needed to strengthen the retail sector, which is already in a state of upheaval due to booming online trade, and to revitalise the city centre and the many shopping locations in the city districts. Together with our trade associations and the Hesse Trade Association, we have set up a vision office that provides owner-managed, stationary retail businesses in particular with tools and measures to further develop their business concept in a sustainable manner based on their respective core competencies." The financial support of the state within the framework of the "Alliance for the City Centre" programme represents an important further building block in this regard.