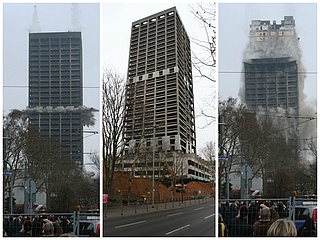 Exactly three years ago today, the time had come: at 10 a.m. on February 2, 2014, the AfE Tower was razed to the ground almost 40 years after it was built. Blaster Eduard Reisch and his team had brought the building down with around 1,400 charges of explosives after elaborate preparations that were necessary to blast the almost 50,000 tons in such a way that the residents, the adjacent houses and the subway would not be harmed. Safety zones were set up around the building. Numerous onlookers watched the events outside safety zone 2 that morning - some with great relief, others with some melancholy.

Because until early 2013, the not-so-nice AfE (Department of Educational Sciences) tower housed some departments of the Johann Wolfgang Goethe University. Everyone who studied here associates very special memories with the tower. Admittedly, not all of them were positive, like the long wait at the elevators when you had to go to the upper seminar rooms. Or the numerous exams that had to be written here. But there are also the nice memories, like the great view of the city from the upper floors. Memories of the friendships that were made during the seminars or in the breaks over a coffee.

And that's why, three years after the demolition, we want to remind you once again of this building, which is very striking in its own way, of the many beautiful moments as well as those that you would like to see buried under the rubble of the collapsed tower. And, of course, of the smoothly executed demolition, which was a very special event in Frankfurt 2014! 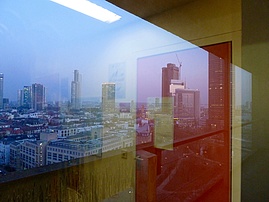 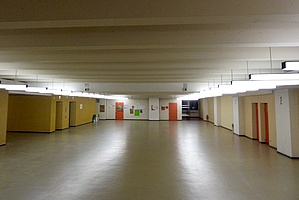