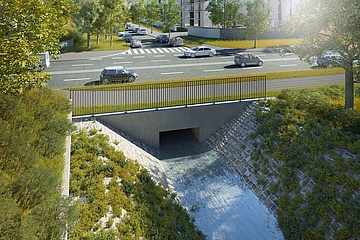 In Sachsenhausen there is currently a lot of construction going on. Anyone driving into the district from the Alte Brücke is already confronted with the first major construction site. And also at the new Henninger Tower and the area around it the work is not yet finished. In addition to construction sites like these, there is now another one: The old bridge that crosses the Luderbach in Kennedyallee will be replaced by a new one by the Office for Road Construction and Development. Before the actual work can begin, a number of trees will first have to be felled in the immediate vicinity of the bridge area. For motorists, this means that only one lane will be available on Kennedyallee at the height of Richard-Strauss-Allee from Monday, February 19, to Friday, February 23.

In early April, the actual construction work will then begin. The municipal planners expect the bridge to be completely renewed by the end of the year - including the carriageway, footpaths and cycle paths, bridge railings and culvert for the Luderbach. The Office of Road Construction and Development will provide early information about the steps in the construction work and the effects this will have on road users.

The new construction of the bridge in Kennedyallee is part of the "Bridge Construction Program 2015 - 2019" of the city and is financially supported by the state of Hesse.