Incredibly cute: offspring of the Little Anteaters at Frankfurt Zoo
from FFM Aktuell 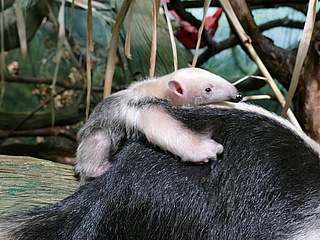 There's nice news to report from Frankfurt Zoo again - and it comes with an extra dose of cuteness today: already a few weeks ago, the Little Anteaters in the Grzimek House had offspring. For the zoo public, nothing was to be seen of it so far, but now the young animal - piggyback on the back of its mother - can be observed more and more frequently in the facility.

"Despite its age - the house was built in 1978 - the Grzimekhaus in Frankfurt Zoo is something special, especially thanks to the large department for nocturnal animals. But the daytime section is also home to numerous rare and very interesting species. Here is also the enclosure of the small anteaters, about whose successful breeding I am very pleased," says culture and science department head Ina Hartwig.

"The small Tamandua, as the anteater species is also called, is a female," says zoo curator Johannes Köhler. "It currently weighs about 700 grams and is gaining weight nicely. The cub is still either hidden in its box or being carried around the enclosure on its back by mother Pepita. Here you can easily observe how the species-typical black and white fur color of mother and child merge, so that the young animal is well camouflaged," explains Köhler.

For the nine-year-old Pepita it is already the third young animal. Father is Yoda, also nine years old, who is not with the two, because tamanduas live solitary. Yoda is only left with the female for mating, who then takes over the rearing of the young alone. The cute offspring will be seen on mom's back for even longer, because tamandua youngsters ride there for up to six months until it is almost as big as her. After that, it stays with her for about six more months until sexual maturity. At about one year of age, the young separate and begin their solitary lifestyle.

Southern tamanduas (Tamandua tetradactyla) have been successfully bred at Frankfurt Zoo since 1998. They are native to the rainforests and savannas of South America, including Manú National Park in Peru, where the Frankfurt Zoological Society has a focus for its global conservation work, which the zoo supports with funds from the Nature Conservation Euro. Sharp claws, powerful front legs and a muscular coiled tail that is hairless at the tip make these animals skilled climbers. They are both ground and tree dwellers. Their favorite foods include ants and termites. Tamanduas use their powerful claws to break open termite mounds, and the insects are then picked up with their extremely long tongues.

Tamanduas are classified as not endangered (least concern) according to the Red List of the World Conservation Union IUCN, however, several factors such as the constantly intensified agriculture and forestry, hunting and road construction threaten their habitat.

For all the info on your zoo visit, visit: https://www.zoo-frankfurt.de/