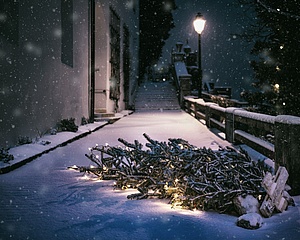 And just like that, the Christmas season is over again. One by one, the Christmas lights are taken down and the Christmas tree decorations are mothballed until next winter. And then in many places the annual question arises again: Where to put the Christmas tree? Thanks to FES Frankfurter Entsorgungs- und Service GmbH, there are two options again this year for all Frankfurt residents to dispose of their tree freed of its decorations.

Option 1: As in previous years, the Christmas tree can be disposed of during the month of January either via the brown organic waste bin, the grey residual waste bin or with the help of the street cleaning service. The prerequisite is always that the trees are no longer decorated in any way and that they are shortened to pieces of no more than one meter.

Option 2: The second option is the now seventh time offered and now well-established collection tour with fixed dates in individual districts. Between Monday, January 10, and Friday, January 28, a special vehicle will be used to collect Christmas trees only. To do this, you simply have to place the trees at the edge of your property on the day of collection. It is important that the tree is clearly visible and at the same time easily accessible by the collection vehicle. Again, the trees should be decorated and shortened to pieces of no more than 1 meter.

In the Bahnhofsviertel, the Old Town and the City Center there are no separate dates, because there the street cleaning is daily on duty and takes the Christmas trees.

Naturally, Christmas trees can - quasi as a third option - also be dropped off free of charge at the RMB Rhein-Main Biokompost in the Osthafen or as part of the car boot service at the FES recycling yards.

FES expects the combination of options to result in faster removal of the estimated 80,000 Christmas trees, approximately three-quarters of which are composted. Nevertheless, it remains a logistical challenge. FES asks for your understanding if trees lying around can be seen in the cityscape for a few days.

The schedule of the Christmas tree truck is also available on the Internet at fes-frankfurt.de.