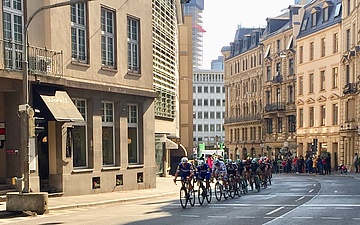 After a two-year break, in 2022 - 60 years after the first edition - the cycling classic Eschborn - Frankfurt (once: Around the Henninger Tower) will finally take place again this year on its traditional date: the anniversary of this sporting event can thus be celebrated on May 1. Big names of professional sports are expected at the start, including John Degenkolb, Alexander Kristoff, Pascal Ackermann or Jasper Philipsen. In addition, around 6,000 amateur cyclists will be taking part in the ŠKODA Velotour and the youngsters will also be celebrating with seven races. There is also good news for fans: The race can be followed not only on TV, but also again directly at the track. Because everywhere fans are allowed without restrictions.

At the start in Eschborn, at the Taunus icons and in the finish area in Frankfurt City around the Old Opera awaits the visitors after a two-year break again a true cycling holiday with a large Expo (in Eschborn on 30.04. + 01.05. and at the Alte Oper on 01.05.), "kinder Joy of Moving mini tour" Kids Bike Parade and much more.

Such a large event in public space naturally also brings traffic obstructions. Which streets are closed on Sunday, you can see HERE.

But in addition to car traffic, streetcar and bus lines are also affected by the closures. S-Bahns and subways, on the other hand, will run unimpeded and according to schedule.

The destination area at the Alte Oper can be easily reached by S-Bahn and subway. The Taunusanlage S-Bahn station, where lines S1 to S6, S8 and S9 stop, is just a few meters away. The U6 and U7 subway lines stop practically directly below the finish line, at the Alte Oper station. The U4, U6 and U7 subway lines run with additional cars, offering more space than usual. The U7 line runs, as well as many bus lines, already from about 8 o'clock quarter-hourly instead of only every 30 minutes.

Inform timely and up to date

All information on timetables and detour is available on the RMV service telephone at 069/24248024 around the clock every day and on the Internet at rmv.de.

The changes in detail

The U3 is from 9 to 13.30 o'clock only between south station and Oberursel station on the way.

The U7 runs already from about 7:40 twice as often as usual, so quarter-hourly.

Line 11 runs from 8 a.m. to 6 p.m. between the main train station and Allerheiligentor via Sachsenhausen.

Line 12 operates from 8 a.m. to 6 p.m. in the west between Schwanheim and the main train station and in the east between Fechenheim and Gravensteiner Platz.

Line 14 can only run between Mönchhofstraße and Hauptbahnhof (south side) from 8 am to 6 pm.

The streetcar line 16 runs from 8 to 16.30 only between Offenbach city limits and main station (south side) and between Ginnheim and Westbahnhof.

The Ebbelwei-Express of the VGF remains on this day in the depot.

From 8 a.m. to 2 p.m., the M32 line connects only Ostbahnhof and the police headquarters at Miquel-/Adickesallee.

Line 34 operates from 8 to 16.30 clock in two sections between Bornheim Mitte and Hausener Weg and between Mönchhofstraße and Rebstockbad.

Line 36 runs from 8 am to 6 pm only between Hainer Weg and Südbahnhof.

Line 50 runs from 7 am to 4:30 pm only between Unterliederbach and Rödelheim Bahnhof.

Line 54 will run from 7 to 16.30 clock from the Leonardo da Vinci Allee to the stop Europaviertel West extended.

Line 58 will operate from 5 a.m. to 6 p.m. only between Friedhof Höchst and Airport Terminal 1.

Line 64 operates on April 30 from 9 a.m. and on May 1. May only between Ginnheim and Miquel / Adickesallee.

The Metrobus line M72 operates from circa 7.30 and 16.30 only between Northwest Center and Industriehof.

Line 75 will not start operating until 2 pm.

From 12 - 17 o'clock the race will be broadcast live on HR television.

All further info on the individual races and the schedule can be found at: https://www.eschborn-frankfurt.de