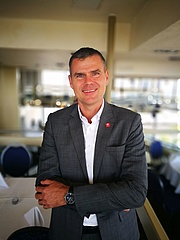 From Service to Sales to General Manager - from Switzerland to Thailand to Frankfurt: Ingo Domaschke's dream was always to manage a hotel. Now, as the new Cluster General Manager Frankfurt of Leonardo Hotels Central Europe, he is responsible for seven hotels with almost 1,800 rooms. For him, the flat hierarchies, his own decision-making possibilities, the determined expansion as well as the young dynamic team were decisive for the step into his new position. His goal: to further advance the Leonardo Hotels brand in the Rhine-Main region - together with around 370 employees from all locations in the region. Further information: www.leonardo-hotels.com

Ingo Domaschke completed his hotel management diploma in Switzerland. He started his practical hotel career in 1992 at Mövenpick Zurich in the service area. Afterwards, he was drawn to faraway places, first on a language trip to Australia, then on a luxury ship. This was followed by a management trainee at the Sheraton Suites Key West Florida and later the promotion to Director of Revenue. After a further station as Complex Revenue Manager in Salzburg at the Sheraton Jagdhof and Hotel Schloss Fuschl Luxury Collection, he worked for more than ten years in Thailand for the ONYX Hospitality Group. Among other things, he managed the Amari Residences Bangkok, opened the first hotel of the lifestyle brand OZO on Koh Samui and was responsible for various major projects such as the renovation of the Amari Tower in Pattaya for 100 million euros or the new construction of the Ozo Pattaya with 406 rooms.

Ingo Domaschke is passionate about travelling - he has already visited over 65 countries. He is also a committed sportsman and Bayern Munich and Dynamo Dresden fan. "Maybe Eintracht Frankfurt will join soon," he smiles, looking forward to his new challenge.

With the corporate credo "feeling good", the individual character of all Leonardo hotels is made tangible. High quality and service standards as well as stylish interior design with regional flair in central tourist and business destinations characterize the hotels. This appeals to both business and leisure travellers.

Leonardo Hotels Central Europe is part of the Fattal Hotel Group, which was founded by David Fattal in 1998. It is one of the fastest growing hotel chains in Europe & Israel and operates 200+ hotels with 40,000+ rooms in 100+ destinations and 18 countries. The brand portfolio includes: Leonardo Hotels, Leonardo Royal Hotels, Leonardo Boutique Hotels, NYX Hotels by Leonardo Hotels, Jurys Inn, Apollo Hotels and Herods. The Israeli hotel group is listed on the Tel Aviv Stock Exchange (TASE). www.leonardo-hotels.com