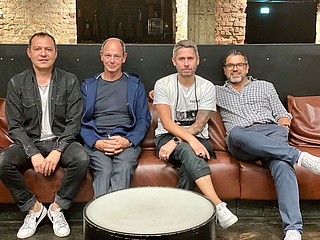 The Initiative Gastronomie Frankfurt e. V., launched at the end of 2015. (IGF), under its chairman Madjid Djamegari and his deputy James Ardinast, is committed to the interests of restaurateurs and the position of the hospitality industry in Frankfurt am Main. Especially in these difficult times, which will continue to be a great challenge for the gastronomy for a longer time, the work of an association like the IGF is immensely important. This is also the opinion of the Leaders Club Germany, which awarded the MUTMACHA! prize in four categories for the first time in a festive digital award ceremony. The IGF received the award in the category "Network for the industry". The MUTMACHA! award of the gastronomy network Leaders Club honors creative concepts, social initiatives and outstanding personalities who give courage in these hard times and show new ways of dealing with challenges.

In his laudatory speech, Leaders Club supervisory board chairman Michael Kuriat explains: "IGF has set impulses in these challenging times, sent positive signals under difficult circumstances and stood up for the industry. The association not only entered into direct, constructive dialogue with local decision-makers and similarly positioned networks, but also organised talks and discussions on relevant topics. In addition, the IGF founded the online platform FFMLY with the aim of mastering the crisis in solidarity in difficult times. We thank you for your commitment and deservedly award you with the MUTMACHA! Award in the category &sbquo;Network for the Gastronomy'." IGF Executive Director Madjid Djamegari proudly stated, "We are overjoyed and can hardly believe to receive this high honor. We accept the award on behalf of all the members who have shown incredible strength and solidarity to encourage themselves and others during this difficult time." And co-chair James Ardinast adds, "The award is a great expression of appreciation for our volunteer efforts and gives us strength for the many tasks ahead."

The hard times are still ahead

Both board members of the IGF emphasize that the hard times are not over yet for the gastronomy. They are grateful for the financial support from the federal and state governments, "however, much of the promised financial assistance has still not flowed," Djamegari said. There is also no perspective on when and how things will continue, he said. "It is inconceivable that the <x>ampersand</x>sbquo;unbureaucratic' November aid promised in October cannot be disbursed until the end of January at the earliest for technical reasons," Djamegari said. "Not to mention December aid, for which it is not even clear when and how it can be applied for. Restaurateurs are already upfront for rents and salaries and other costs, and many have their backs against the wall. Also, the legal possibility to reduce rent payments due to the disturbance of the business basis has been announced, but not yet implemented. Meanwhile, the first landlords are taking advantage of the situation and terminating tenancies on the grounds of arrears in the hope of obtaining a higher rent when the space is re-let." The IGF board agrees that without an extension of the suspension of the insolvency filing requirement, the November and December relief will come too late for many businesses and the wave of bankruptcies will be inevitable. "The existential angst is felt throughout the industry," said IGF executive director Goran Petreski, "and the anger among restaurateurs is growing."

Despite major challenges, annoyances and enormous hurdles that will continue to be faced in the coming months, IGF members will not bury their heads in the sand. "The hospitality industry has proven that it can implement creative and flexible ideas in difficult circumstances. So far, the infection record shows that there is no increased risk of infection from catering establishments. We are equipped with hygiene and safety resources and are therefore in the best possible position for the new start," says IGF board member Matthias Martinsohn. The association is of the opinion that the gastronomy should reopen at the same time as the retail trade after the end of the lockdown. The situation with bars, clubs and the cultural scene, on the other hand, remains much tighter. "We appeal to policy makers to show more courage and allow events with rapid tests in addition to vaccination, thus allowing a reboot of the cultural and club scene even before the much-cited <x>ampersand</x>sbquo;herd immunity'," Djamegari said, "the club and cultural scene has been closed since March 12 and we risk losing structures and meeting places forever with each additional day of closure."

There is hope for a normalisation at least for the second half of 2021. "Frankfurt Fashion Week in July is already sending positive signs," says James Ardinast, freshly crowned AHGZ "Head of the Year". In addition, the IGF is starting to plan the Frankfurt young talent competition "Kochtalent 2021" as well as the "Frankfurter Bar- und Restaurantwoche" these days. Both events are financially supported by the city of Frankfurt.