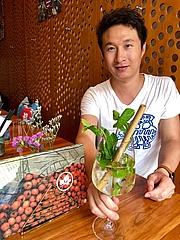 Plastic waste is an enormous problem that is to be tackled ever more intensively. How effective individual measures are remains to be seen. But any plastic waste that can be avoided is a step in the right direction. A few weeks ago, the EU Commission announced that straws and other plastic products are to be banned. A good decision, in the opinion of the member businesses of the Initiative Gastronomie Frankfurt e. V. (IGF), who have decided to gradually do away with plastic items in their restaurants and pubs. An alternative has already been found for the straws and is currently being tested: Instead of plastic, the focus is now on bamboo.

The idea for the bamboo straws comes from Hung Quach, owner of the Vietnamese restaurant Vipho on Oeder Weg. He came across the plastic alternative during a stay in Vietnam and brought 1,000 of the environmentally friendly drinking straws with him. The advantage of these straws: they are not only 100 percent organic, but also reusable due to their stability. "Our member companies want to rethink when it comes to plastic," says Madjid Djamegari, chairman of the IGF board. "Hung's idea is excellent, and I really hope that bamboo drinking straws will prove themselves in use. It is important that our industry is ecologically aware and seeks and tries alternatives to plastic. I'm sure there will be many innovations coming to market in the near future."

To date, 17 IGF member companies have been testing the bamboo drinking straws from Vietnam for two months, with more to join in the coming weeks. In addition to Vipho, they include VaiVai in the West End, Bangkok Restaurant in the North End, Sam Kamran's restaurants (the seven Fletcher's burger chains, Caf&eacute; Hauptwache and Mantis Roofgarden), Blue Water, IGF board member James Ardinast's restaurants (Maxie Eisen, Stanley Diamond, Chez IMA) and Restaurant Backschaft in Offenbach. The latter's managing director Gunnar Ohlenschläger explains: "We will generally no longer purchase plastic and are intensively looking around for alternatives. Of course, I will therefore test the bamboo in everyday use."

The EU Commission has found that the annual straw consumption of an EU citizen is 71 pieces and adds up to a mountain of billions in total. Plastic plates and plastic cutlery are also among the top ten items, 70 percent of which are found as trash on the beach. So every alternative is an important step in the right direction