Insights into Frankfurt as a financial centre
from FFM Aktuell 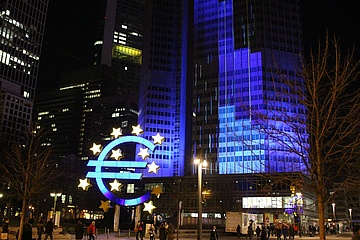 Mayor and City Treasurer Uwe Becker invites to the financial tour on 4. February

(kus) Frankfurt am Main is the city on the European continent that clearly shows in its cityscape that it is the center of economic and monetary policy.

Mayor and City Treasurer Becker invites you to the first financial tour on Saturday, February 4. Citizens will have the opportunity to explore Frankfurt's financial center together with Mayor Becker and City Guide Christian Setzepfandt. The two-hour tour will lead on foot from Paulsplatz through the nearby city centre towards Ostend.

Business was done in Frankfurt from very early on: at the crossroads of important trade routes, merchants from all over the world met and exchanged not only goods, but also their currencies. And so Frankfurt was actually already something of an international financial centre in the early Middle Ages. The core of this development is the Old Bridge over the Main, with the bridge the trade traffic to Frankfurt increased, with the trade came the fair, with the fair the money exchange, with the money exchange the banks and the stock exchange came to the city on the Main. Today, the Rhine-Main region accounts for about ten percent of the gross domestic product, and that with an area of only three percent of the entire federal territory. "Frankfurt is home to the ECB and the German Bundesbank, and the skyscrapers of the banks are the tallest in the eurozone. But it is not only these obvious features that point to the financial centre. The tour relates the present to the past and is definitely interesting even for connoisseurs of Frankfurt's history," says Becker.

Interested persons can register by email by Wednesday, Feb. 1. February, at 12 p.m. to <link>dezernatII@stadt-frankfurt.de as well as by phone Monday through Friday from 10 a.m. to 4 p.m. at 069/212-36424, providing full name and a phone number. Early registration is requested as places are limited. The allocation will take place after receipt of the registration. The registration is binding. Accompaniment by persons who have not registered is not possible.

During the financial tour, photographs will be taken for publications of the City of Frankfurt am Main. Those who do not agree with the publication of these pictures are asked to inform us when registering