Ironman will remain in Frankfurt until 2026
from FFM Aktuell 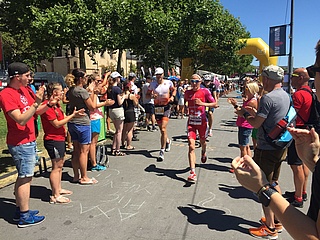 This year, there is a sporting anniversary to celebrate in Frankfurt: for 20 years now, the Main metropolis has hosted the traditional Mainova Ironman European Championship race. There is also good news to mark the anniversary: the sporting event, which has been a fixture in the racing calendar of numerous professional and age group athletes since 2002 and is one of the most popular Ironman races in the world, will remain in Frankfurt until 2026.

Since the first race on 18. August 2002, more than 60,000 athletes from 60 nations have been greeted at the Mainova Ironman European Championship Frankfurt at the historic finish line at Römerberg with the magic four words 'You are an Ironman' and celebrated by the fans. Celebrations were also held on Tuesday, May 24, to mark the 20th anniversary of the Mainova Ironman European Championship Frankfurt. As part of the celebrations, the five-year extension of the event in the Main metropolis was announced. With the contract extension up to and including 2026, the athletes can look forward to more spectacular races, tears of joy, sweat and the will to win.

More positive news followed directly afterwards from Constantin H. Alsheimer, Chairman of the Management Board of Mainova. Thus Mainova, one of the largest regional energy suppliers in Germany, will remain the title partner of the Ironman race in Frankfurt for the next three years.

City Councillor Josef says of the contract extension: "The Mainova Ironman European Championship is as much a part of Frankfurt as the skyline and the Green Sauce - the event has now become a sporting landmark of our city, attracting the greatest international attention and an enormous amount of positive feedback. As head of the sports department, I am therefore very pleased about the contract extension with the organizers. Together, we will continue to provide sporting, economic and tourist excitement with the Mainova Ironman European Championship Frankfurt over the next five years. On behalf of the city, I would like to thank everyone involved."

"Since 2016, Mainova has supported the Ironman European Championship in Frankfurt as title sponsor. In addition, we are the official presenting partner of the junior event IRONKIDS and are committed to the approximately 4300 volunteers. By extending our title partnership, we are underlining our commitment as a strong partner of running and endurance sports, whose energy keeps the Rhine-Main region running," says Alsheimer. "The Ironman is one of the most important mass sporting events in our home region and also has international appeal. The race stands for the extraordinary performance of the athletes and enthusiasm along the course."

Oliver Schiek, Managing Director of Ironman Germany, underlines the positive news: "We are delighted that we have been able to extend our long-standing cooperation with the host city of Frankfurt for another five years and that Mainova will remain our title partner up to and including 2024. The Mainova Ironman European Championship Frankfurt is a world-class event and enjoys a legendary reputation in the triathlon scene. It's great that the whole region is pulling together, so that our athletes can continue to experience exceptional races in Frankfurt in the future."

On Sunday, June 26, it is once again: "Welcome to the longest day of the year" in the host cities of Frankfurt and Langen. In addition to a strong professional field, around 3,000 age group athletes are expected at the Mainova Ironman European Championship Frankfurt. The athletes will complete the 3.8-kilometer swim course early in the morning in Langen's Waldsee lake. The 182-kilometer bike course will take participants through Frankfurt and the picturesque towns and villages northeast of the metropolis, such as the Main-Kinzig district and the Wetterau region. The 42.2-kilometer run course is completed in four laps and leads along the Main River and the Frankfurt skyline with the finish line at Römerberg. The first athlete is expected there at around 2:15 pm. The finish line is again at 10 p.m. At the Mainova Ironman European Championship Frankfurt, the title of Ironman European Champion will be awarded to the male professional athletes and the age group athletes.

The start of the PRO men will be at 6.25 am local time, the PRO women will start at 06.30 am local time. The rolling start for the age groups is from 6:35 a.m. to 7 a.m. local time. The after-race press conference is scheduled for 5 p.m. at the Media Center in the Römer.