Italy on the Main
from FFM Aktuell 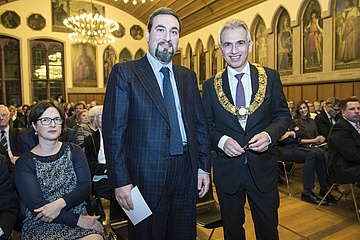 City of Frankfurt on the Main

Anniversary celebration of the German-Italian Association at Frankfurt's Römer

(kus) On the occasion of the 50th anniversary of the German-Italian Association, Lord Mayor Peter Feldmann welcomed its members and guests to an evening reception in the Kaisersaal of Frankfurt's Römer.

Feldmann paid tribute to the association's great commitment to building bridges for cultural and scientific exchange between Frankfurt and Italy.

"Our shared Roman past, more than any other era, laid the foundation for our modern European society today. Much of what is painstakingly struggled for in today's European Union was already laid out over centuries," said the Lord Mayor."
<x>Even the name of my city hall, Römer, stands for our common past,

Feldmann said with a wink.