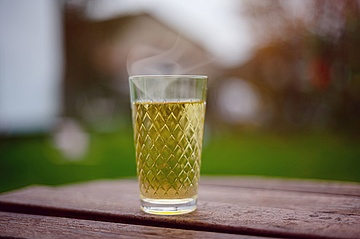 There's a lot we have to do without this winter: Christmas markets, big city bells, or big New Year's Eve parties. Yes, we have to do without a lot - but not everything: the members of the Association of Hessian Cider and Fruit Juice Presses e. V. bring a bit of Christmas market flair to your home with various versions of apple mulled wine. From the classic version with Christmas spices to specialties like Ros&eacute; with black currant to alcohol-free children's punch. "A true cider lover always finds a way to enjoy it," notes Martin Heil, chairman of the Cider Association. "In winter, it's the &sbquo;hot cider' that turns Hesse's national drink into a seasonally appropriate version."

To give the cider a wintry, Christmassy flavor, cinnamon and cloves, in particular, come into play. But: "There are many recipes for hot cider, and every wine press house spices its Stöffche in its own way", Martin Heil explains. In their own Christmas recipes for "apple mulled wine", the wine press makers rely on spice aromas and refine it with lemon or a little sugar. It also gets Christmassy without alcohol: in winter, many wine press houses bring non-alcoholic punch to the market, which, in addition to apple juice, also contains cherry and elderberry juice as well as cinnamon and cloves, for example, or a non-alcoholic variant with a selection of different vitamins. Speaking of which: "At five to 5.5 percent, apple mulled wine has significantly less alcohol than mulled wine made from grapes; there, the alcohol content is eight to eleven percent," explains Martin Heil. "So you don't feel it as quickly."

All apple mulled wine specialties are spiced ready to drink and only need to be heated - not boiled up. They are available in 0.75- and 1-liter bottles in stores. Those who have their own ideas about which spices they prefer and in what quantities, or whose favorite wine press doesn't have a "Heißen" on offer, can easily prepare the winter speciality themselves - and choose their favorite Stöffche as a base.

"Apple mulled wine, by the way, is typically Hessian," says Marin Heil, "but also delights new Hessians." Martin Heil concludes, "Especially in the now upcoming cold season, the &sbquo;Hot Apple Cider' is doubly a hot happiness. Not only is it warming as a drink, but the &sbquo;Hot' also brings back a bit of the fond memories of the good feeling of togetherness in the reflective pre-Christmas season."