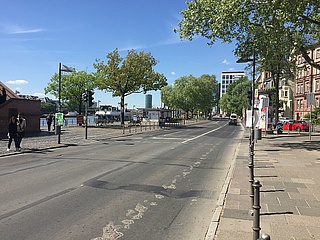 Walking between Romans and Main, sitting in the café or restaurant and enjoying the view of the Main River without being disturbed by passing cars - this will in fact become reality August 2019. For one year, the northern bank of the Main between Alter Brücke and Untermainbrücke will be closed to traffic and opened to pedestrians and cyclists. This was announced by Lord Mayor Peter Feldmann and Head of Transport Klaus Oesterling at a joint press conference. The Lord Mayor is delighted that the street will then belong to pedestrians and cyclists for a year: “The people of Frankfurt have turned enthusiastically to the river in recent years. The two banks of the Main belong to the absolute hotspots in the warm seasons. I am delighted that with the opening of the Mainufer to foot and cycle traffic, even more space will now be created - the attitude towards life there will change significantly, not only for the residents, but for all Frankfurters.“

Department of Traffic Klaus Oesterling once again emphasized that the closure was a test: “On the one hand, we want to find out how traffic changes in the city centre. But I am also happy to see how people who are on foot or by bike will accept this area.“

Laut Oesterling will collect extensive data on traffic flows during the months of closure. Already last year the traffic volume at ten junctions was determined. A comparative measurement is planned during the closure in March 2020. Major conversions are not to be carried out during the trial phase. This means that on the promenade there is no sudden arrival of new dealers or localities on the banks of the Main. However, the restaurants and cafes already located there will be allowed to expand their outdoor areas. This also contributes to increasing the attractiveness for visitors - especially in the summer months.

In the coming year, a balance sheet will be drawn after the Museumsuferfest 2020. Only then will it be decided whether the temporary opening of Mainuferstraße for cyclists and pedestrians can become permanent.